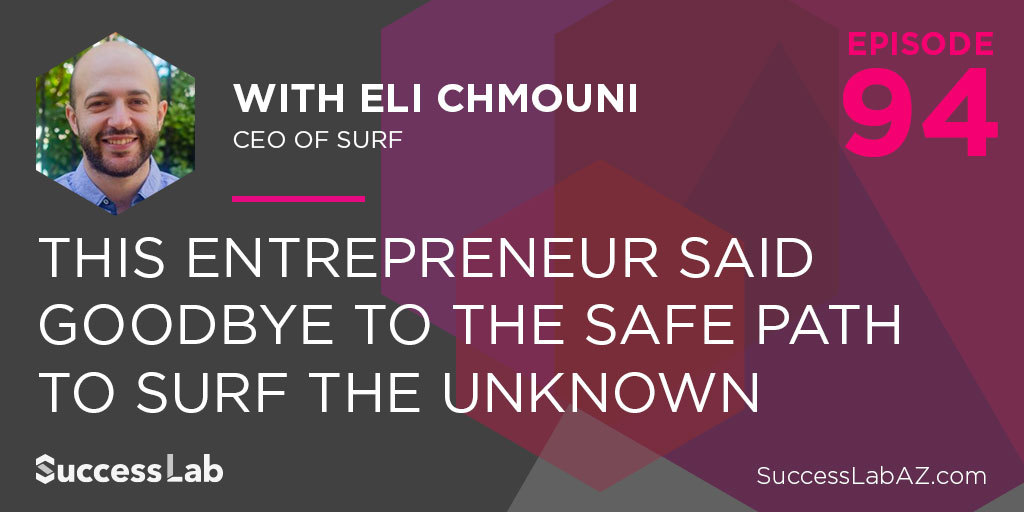 After devoting years to earning a bachelor’s and master’s degree in mechanical engineering, Eli Chmouni found himself frustrated and restless in a job he couldn’t stand. Rather than accepting another 30 years of the same, he began to explore the idea of working for himself doing something he loved. From that point, Eli says, there was no turning back.

Today, Eli is the founder of SURF, a media distribution and rideshare entertainment company that places tablets in rideshare vehicles. But this is not his first venture. He’s actually a four-time entrepreneur, making successful exits from two of his companies within two years of launching them.

In this interview, Eli discusses how a winning a competition jump started his foray into entrepreneurship, how he determines which ideas to pursue, and how he recovered from his darkest moment as an entrepreneur. He also shares stories about his mentors and the important lessons they taught him.

What led you to start SURF?

I moved to the U.S. in 2006 to attend Arizona State University. I received my bachelor’s and masters in mechanical engineering and was able to get a job as an engineer, which I eventually hated. I didn’t like sitting behind a desk and I didn’t like being told what to do, so I decided to quit. After that, I had to figure out what the next step would be.

I’ve always been drawn to media entertainment ads and video and production, so I Googled ‘how to make money from videos. Based on that, I found several online competitions that were giving prizes on different videos that you produced and filmed. To make a long story short, I applied for one of those competitions and ended up winning. And then I ended up winning another one.

Companies started asking me to film their commercials and videos and all of a sudden I had a business. Fast forward to today and I’ve started several other companies. One was a social networking website for military veterans and the next company was Tipsy, which is a nightlife app very similar to MoviePass or ClassPass. A year and a half ago, we launched SURF for rideshare entertainment and advertising. We wanted to give passengers more control of their trip experience when they take an Uber and Lyft, and we knew we could make it much better than a taxi TV experience and really capitalize on the growth of this new transportation category.

As a serial entrepreneur, how do you choose which ideas to dedicate time and energy to?

One thing I’ve learned over the past 10 years is to never approach a business that I personally don’t have passion for – a passion for the subject, a passion for the customers that we serve or a passion for the entire category as a whole. I’ve done businesses in the past that I thought were really good ideas and could make money from them, but six months in, it just becomes like a job. Every time someone sends you an email, it feels like an obligation as opposed to something you’re super passionate about.

Now I filter my ideas by determining if it’s something I will enjoy every single day. Otherwise, it may be something that is a good business model and a good money maker, but I know someone else needs to do it.

What has been one of your darkest moments as an entrepreneur and how did you recover?

We’ve definitely had our ups and downs with SURF. Last year, when we launched, we grew too fast and got to that point where we pretty much ran out of money. We were like, “Alright, this is not working out. We’re shutting it down.” We had an investor jump in and help us out.

The darkest moments are when you’re sitting there thinking, “All this time, all this effort, all this money and it’s not what the market wants.” And then all of a sudden, you get a good email that pulls you out a bit.

Entrepreneurship is not for the faint of heart – it’s like a rollercoaster. You have a super freaking awesome day or you have a depressing day. Based on those two emotions, you get to decide how you survive week after week after week.

Has there been a specific person who has significantly shaped your path in some way?

Gordon McConnell was my first mentor. He took me under his wings and taught me a lot of what I know about entrepreneurship and how to run a business. He’s this Irish guy with no filter, and I loved it because I didn’t want a mentor that was telling me everything I did was awesome. I tell all entrepreneurs, it’s your mom’s job to tell you everything that you do is awesome. Your mentor’s job is to destroy everything you’re building so you can actually defend it or do it better.

Another person is Aaron Dragushan, the founder and CEO of Giftcard Zen. As I mentioned, last August, we were growing so fast that we honestly ran out of money. I met Aaron at a social event here in Phoenix called the Cocktails with Creators and we become casual friends. He called me one day because I was stressing about the business, and said, “What’s your checking account number?” Then he wired us $25,000, no questions asked. The only thing he said was, “Hey, I just wired you $25,000. But what I want you to do is take this weekend off and actually get some rest and sleep.”

How do you make impactful connections for yourself and partnerships for SURF?

We all meet people in different ways, whether it’s through LinkedIn or at social events. I never say no to an opportunity to meet someone interesting or someone who might need some advice. You never know how it circles back, right?

If you are able to paint the vision of what you want your company to be, as well as how that person fits into that vision, they will be able to see how they become part of the story. If everyone knows what their contribution could be to this big vision you’re trying to build, then they’re more likely to rally behind you.

What’s one piece of advice you can give to fellow entrepreneurs looking to make impactful connections?

Just reach out. The worst thing you’re going to get is a no. Students ask if they can reach out to people on LinkedIn, and I tell them they’re in the ideal position to message someone. It’s as simple as, “Hey, I’m a student and I want to learn from you…” – no one’s going to say no to that.

Everyone’s been through that journey where they had to learn from someone. I get approached a lot on LinkedIn, and I answer those messages and meet people for coffee. It’s exciting because you never know if they’ll be the next big thing. Just reach out. Start somewhere. Put fear to the side because that’s going to be the only thing holding you back.

Are you a coffee drinker? No.

What is your favorite piece of technology? I’m pretty attached to my phone. Every time it buzzes, I check it.

What’s one book you would pass along to a fellow entrepreneur? One book I love that we started using with the managers in the company is the High Growth Handbook. It’s more of a manual on how to run your company and not just stories.

Who is one person you’d like to make a connection with? Richard Branson. He’s my number one entrepreneur that I aspire to be like. Also, I’d say the designers of theme park rides at Universal Studios. I love the fact that they can create worlds of experience.

What’s one of your favorite icebreakers? I like to ask people how they started out because I think everyone has a unique back story.