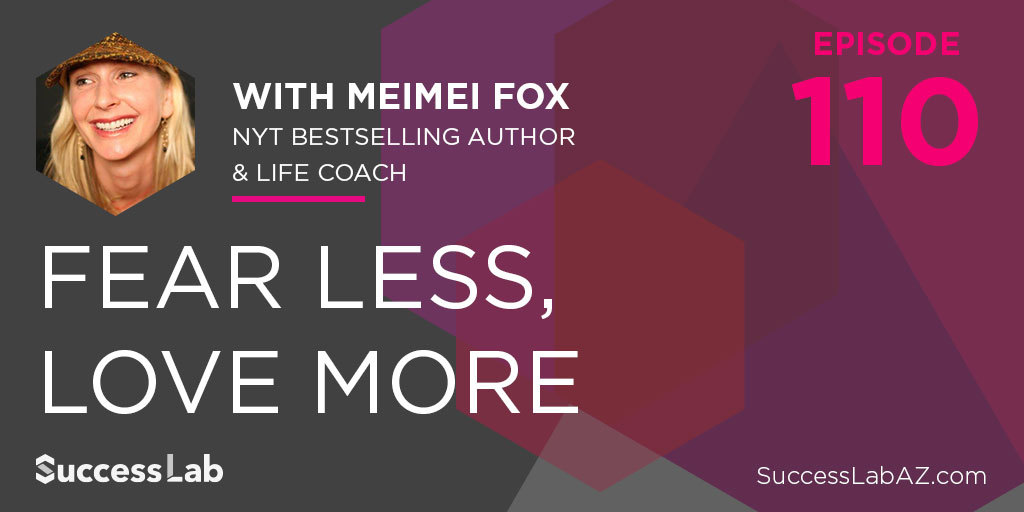 When MeiMei Fox submitted her first book proposal, never in her wildest dreams did she think it would lead to a life-long writing career. But, a fateful connection to the right person (combined with her innate writing talent) soon catapulted MeiMei into the ranks of the New York Times bestselling authors.

Today, she is also a contributor to Forbes, The Huffington Post, and Self Magazine, among other publications, and has co-authored several other notable titles. On top of all that, she manages to find the time to serve as a life coach and mother to twin boys. What’s her secret sauce? Fear less, love more.

In this episode, we talk to MeiMei about how she fearlessly pursues audacious goals, how she overcomes challenges and her approach for getting big things done: worst first.

Your background is in psychology, so what led you to writing?
I studied psychology then I went to work at McKinsey as a management consultant and I intended to go down that path, but I was really unhappy. It was fascinating and I was surrounded by brilliant people, but I didn’t feel that my work was meaningful and helping the world be a better place. After I finished my two-year program with McKinsey, I was lost and I didn’t know what to do next. I was talking with a friend who was a doctor, and he wanted to write a book about supplements and I said, “I can help you write that.” I bought a book called “How to Write a Book Proposal” and I wrote up a proposal for this book that we would co-author. One of my friends knew someone at Penguin Putnam so I sent her the proposal and she wrote back about a week later and said, “I never do this, but we’re going to buy your book.” That’s how my career in writing got started.

What’s been one of your favorite subjects or pieces to write?
I’ve been blessed to have been taken down this path through my mentor in the publishing world. She got me into writing books on spirituality. When I began to work on a book with Robert Thurman, who’s a professor of Buddhism at Columbia University (one of the Dalai Lama’s oldest friends and also Uma Thurman’s dad), I was taken with Buddhism. It’s been fascinating to work on several books about Buddhism, learn more about it and find that it really resonated with everything that I believed about the world. I feel like I was almost called down that path during my career in writing. From there, I went to work on The Art of Happiness in a Troubled World with Howard Cutler, which was co-authored with the Dalai Lama.

How have you accomplished so much over the course of your career?
I expected, and wanted, to have children at a younger age, but I ended up getting divorced and spent most of my 30s being single and not getting remarried until I was almost 40 and starting to have a family then. Even though that wasn’t what I wanted, I ended up with all this time. So, I just kept pursuing my interests. Everything I’ve done has been driven by my passion and my purpose. I don’t seek out to win awards or be the wealthiest or most successful. I just go after what excites me and gets me up in the morning with a smile on my face.

What, if any, was a significant challenge you’ve had to overcome in your career?
Choosing this path is the biggest challenge. There’s a great deal of instability and in the world of book editing and ghostwriting—it can be feast or famine. I get a really huge project and get a big chunk of payment upfront and then another chunk when the book is finished. Other times, it’s like I’m scrambling to pay the monthly bills. You have to be really comfortable with uncertainty. The trade off has been the excitement and the freedom. I’ve literally spent most of my career working whenever and wherever in the world that I wanted to.

As a life coach, are there any common threads you see in what tends to limit individuals from pursuing or realizing those dreams?
I definitely think so. I have a mantra that I’ve developed over the years, which is “fear less, love more.” What I’ve seen with a lot of my coaching clients is that it’s fear that’s holding them back from taking a risk. I think everybody’s suited to different levels of risk and different levels of stability. There are ways that you can keep working a steady job and have a reliable income while also beginning to explore some of your passions. What I often find helpful is breaking it down into smaller steps. The other big part of it is holding people accountable. It’s so easy to put off our dreams and our passion projects and to procrastinate them or push them to the bottom of the pile. A big part of what I do is holding people accountable to say, “here’s this small goal that you set to reach your big dream. What’s the timing of that? What are you going to have done in two weeks? What are you going to have done in a month? How can we just start moving there step by step?”

Are there one or two impactful connections that shaped your journey significantly?
Amy Hurts. She’s the one who was the senior editor at Penguin Putnam who bought and published the book. We became friends as we were working on that book together. At the end of that process, she said, “You know, you can do this for a living.” Even though I now had a published book, I still was in denial over the fact that one could be a professional writer. She said, “I will get you a literary agent and your first freelance editing project.” And she did. She remained at my side, guiding me through that process for a decade. I’m immensely indebted to her.

What’s one piece of advice you would give to someone struggling to achieve an ambitious dream?
I think it’s so important to break big audacious goals into smaller, more manageable chunks. I also think that you don’t have to work with a coach. You don’t have to pay anyone. It could be a partner, a parent, a best friend, but I think it’s really critical to state your intentions out loud and make them known and have someone who is holding you accountable, checking up on you and seeing if you’re continuing to make progress to your goals. Another thing is, a long time ago I heard one piece of advice that I really love –– “worst first.” It’s the idea that you have your to-do list and in the morning you do the worst thing first.

Coffee drinker, yes or no? Yes.
One business tool you’re geeking out over right now? Zoom
Favorite piece of technology? My smartphone
What’s one book you’d pass along to someone who may be looking for new inspiration or a change? The Power of Now by Eckhart Tolle
One person you’d like to make a connection with? Oprah
What’s your favorite ice breaker when introducing yourself to someone? My name. MeiMei is Chinese and means little sister. It was a nickname that my brother gave me when I was born, but stuck my whole life. It’s a really fun topic of conversation.
How many hours of sleep do you get each night, on average? Seven to eight
How can people connect with you? All the social. You can find me on LinkedIn, Facebook, Twitter, Instagram, My Forbes Author Page. And my website is meimeifox.com