How to Have the Hard Conversations to Achieve Success 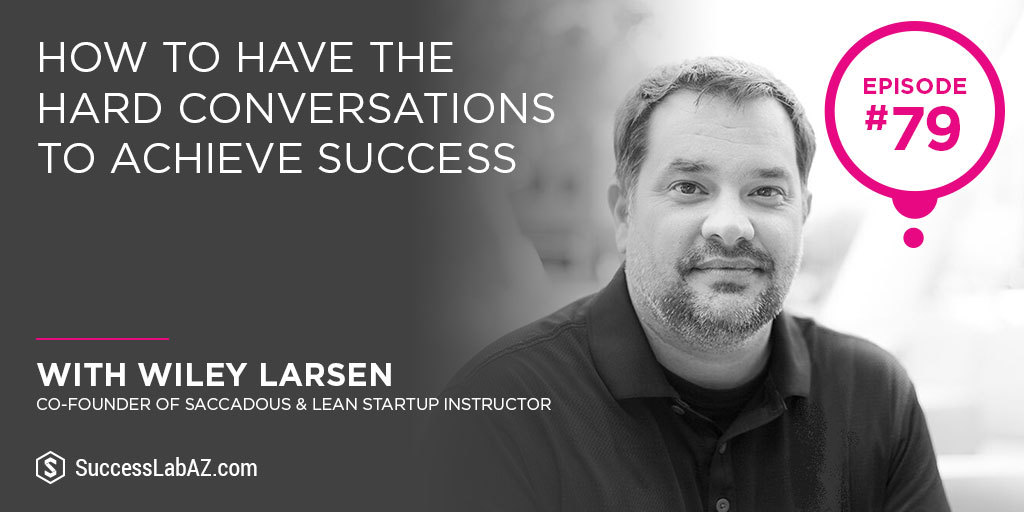 Wiley Larsen was a problem solver from a young age. Growing up, he would actively seek creative solutions to common everyday obstacles, but his journey to entrepreneurship came by chance. After spending eights years as a high school teacher, his knowledge and enthusiasm for startups began while working for Tom Osborne, a congressman in his home state of Nebraska. Wiley parlayed that knowledge into a leadership role with ASU’s SkySong Venture Acceleration program, where he eventually was introduced to the technology that would kickstart his foray into launching his own company. Today, Wiley is the co-founder of Saccadous, a digital health and telehealth startup based on eye-tracking technology.

In this episode, Wiley talks about transitioning from education to entrepreneurship, the tough conversations startup leaders need to have and what qualities people in business should possess to be truly successful.

How did Saccadous come to be?

One of the programs I helped build at ASU, the Furnace program, was created with the idea of giving the public access to patents and technology that had been developed at ASU. The second year, after I handed it off to my colleague, I came across this patent from Dignity Health which I had seen the previous year. It had to do with eye movements and detecting the focus of covert attention. I thought it was interesting and had heard some rumblings of eye tracking and different ways people were using it.

One of the great things about SkySong is there’s so much activity there and so many entrepreneurs walking in and out. I ended up bumping into a couple people I had met previously – one being my co-founder Craig Caffarelli – we got to chatting about Furnace. I said I was interested in this eye-movement technology, and he said he was looking at it also. That was three years ago. Things have started to really ramp up now and we’re excited about the opportunity and partnerships we’re starting to put together.

What’s one thing you’ve had to train yourself on or learn?

What I’ve learned over the 10 years of doing this is that no matter what area you’re in, there’s going to be a regulatory environment you’re going to have to navigate. Whether it’s an FDA medical device approval or something in transportation or in communications, there’s always going to be a regulatory path. I had to train myself on what that looks like. Having little to no knowledge three years ago, I’ve really had to train and learn the vocabulary and learn what type of approach we’d have to take for the FDA approval for Saccadous.

Over the years, how many start ups have you worked with?

From the time I started this, going back to my days in the congressional office and 10 years working with entrepreneurs and startups, I likely come across 100 new ones every year. Just in the five years at ASU, we’ve launched 55 faculty startup companies, and 44 are still alive and kicking.

In working with so many startups, are there common challenges you’ve seen?

The most common problem is having the conversation about ownership and equity in a company, and getting an operating agreement together fairly early on in the process. Whether it’s a community, student or faculty startup, you have to get those uncomfortable ownership conversations out of the way early. In the classes I’ve taught at ASU at SkySong, one of the first things we talk about is what type of company should we form, an LLC or C corp. Most of them are LLCs, and really early on we try to get that conversation happening about the ownership, operating agreement, vesting the ownerships so that a year from now, if a team comes in with five founders and only three of them are really active, that those other founders don’t walk away with large chunks of the company when they haven’t put in the work.

Is there a quality or skill you think all founders or company leaders should have?

Coffee drinker? YES. A venti dark roast. No cream or sugar.
One business tool you’re geeking out over right now? Business Model Canvas
Favorite piece of technology currently? My cordless drill.
One book you’d pass along to a fellow entrepreneur? The Present by Spencer Johnson
One person you’d like to have dinner with? Jimmy Buffett.
How many hours of sleep do you get each night? 8 – 8.5 hours.