Investing in a New Vision for Venture Capital in Arizona 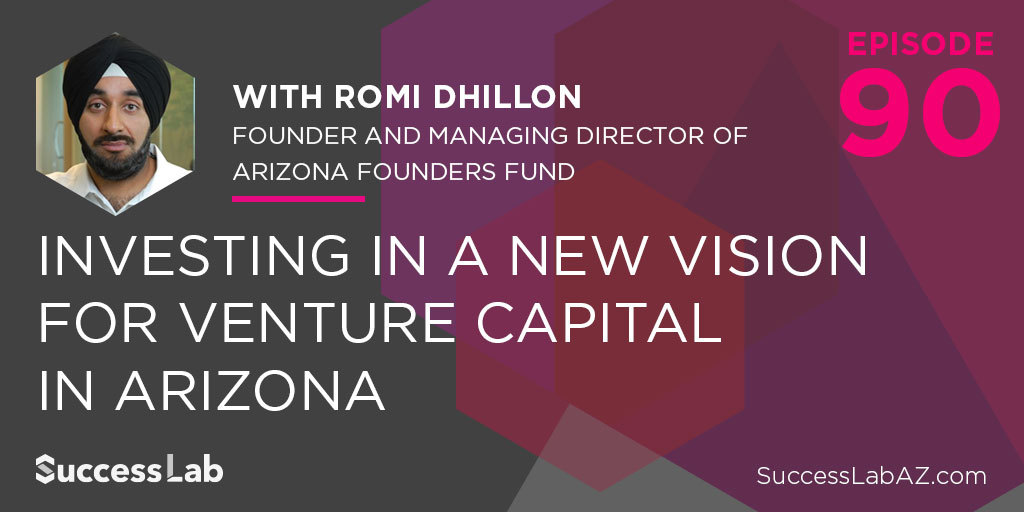 For decades, Arizona’s five C’s – copper, cattle, cotton, citrus and climate – served an important role in how its economy was perceived. But as the Grand Canyon State’s technology ecosystem continues to heat up, Romi Dhillon thinks the five C’s should be updated to better reflect Arizona’s tech-focused future: capital, content, community, capabilities, and community carry.

Romi is no stranger to bringing big ideas to the table. He is the founder and managing director of the Arizona Founders Fund and prior to raising the fund, he worked with Infusionsoft on the company’s Series C and D capital raises. But his background in venture capital started long before that.

In this interview, Romi shares how a mix of serendipity, luck and strategy helped him get his foot in the door of the VC world. He also explains why deep research and 1,300 hours of networking played such a critical role in the success of Arizona Founders Fund, and provides key advice for entrepreneurs looking to set themselves apart and make impactful connections with investors.

What sparked your interest in venture capital?

I didn’t take the traditional path to venture capital. I was recruited out of my MBA at Thunderbird in 2009 for an internship in Utah, which opened the door to work in a VC fund. It wasn’t necessarily for any other reason other than serendipity and luck.

Prior to that, about seven years earlier, I had completed my masters at Columbia and had aspired to work at the State Department in Washington, D.C. or overseas. I started to realize there was going to be a considerable amount of writing involved, especially when working in the foreign service, and I didn’t enjoy writing that much. I knew that if I was going to have a happy career, writing couldn’t really be a part of it, which meant that working in the foreign service wasn’t the right place for me to go. When I stepped away from that, I began working in entrepreneurship on the operations side in a small family business in Northeastern Ohio. That’s how I started my entrepreneurial journey.

What motivated you to take that leap of faith and start Arizona Founders Fund?

I worked in Utah’s startup community from 2009 until about 2012 – before Utah was as frothy as it is right now. Right about the time that I stepped away from Utah and moved to Arizona to work at Infusionsoft was when Utah kind of found its J-curve. I was working at Infusionsoft and we raised a series C from Goldman Sachs and a series D from Bain Capital. Infusionsoft was growing really, really fast, but I was also noticing what was happening in Utah and how any entrepreneur could take 10 steps in any direction and have some pretty incredible conversations with supporters and mentors, thought leaders, and investors. That’s when I thought, “Why isn’t that happening in Arizona?”

Startups were leaving Silicon Valley. The housing costs were skyrocketing due to the tech boom. There was traffic and congestion, and it was an expensive place to start a company. I thought that Arizona was interesting, but Arizona was a conundrum in its separate way. This is still a place where the Secretary of State’s website lists the old five Cs of the Arizona economy – cattle, citrus, cotton, copper and climate. It’s the five ways they thought Arizona was different from every other state. But these were from the 1950s and I thought it was time to create the new five Cs: capital, content, community, capabilities, and community carry (how a relationship between a business and its community is continuously strengthened through its mutual commitment).

What was your experience coming to a new community and starting Arizona Founders Fund?

It depends on which day you caught me. Some days I may have felt I hit the ground running and there were other days where I spent a lot of time waiting for email replies. When I stepped away from Infusionsoft, I started engaging in a lean startup mindset of how to build this fund and began to interview everyone in town. There were 10 months of primary interviews and due diligence with Arizona’s technology founders and investors where I interviewed 400 individuals representing 1,300 hours of discussion. I had 1,000 cups of coffee in that 10 month period and I even viewed the last 10 years of Phoenix Business Journal articles. I analyzed about 5,000 pieces of data concerning tech dealmaking in the state from 1998 to present, and spent a lot of time thinking about the Arizona market and why things were the way they were. It’s one thing to identify problems, but I thought like a tech entrepreneur and tried to figure out what the solutions could be.

What was one of the biggest challenges on launching the fund and how did you overcome it?

I had similar challenges other entrepreneurs have when they go from concept to idea to then making the idea real. It was creating validation and trying to figure out who could be the champions alongside with me. I think that’s really the essence of the entrepreneurial spirit – let’s try to solve problems by trying to figure out how we can utilize limited resources and do the most with the very least.

How have you gone about building relationships in a genuine way?

One of the things I did when I was meeting with entrepreneurs or investors was make it clear why we were meeting right off the bat. I’d say, “Look, I’m here to pitch you on this opportunity. I think that you would be a great fit and I would really like to get your thoughts and advice on either investing, getting you to think about investing, or passing. And perhaps you might suggest someone else in your network who could be a fit.” With entrepreneurs, I would share with them, “We’re a venture capital investor. This is how we go about investing. Here are the check sizes we write. Here are the expectations that we have after we invest.”

Transparency is extremely important because it’s pretty obvious what a venture capital investor does. We invest in high growth, fast growth, technology companies. Sometimes just networking for networking’s sake is not beneficial to us. Our work is really unscalable and takes a lot of time, so I have to be strategic in how I go about bridge building and networking.

What’s one piece of advice you would pass along to fellow entrepreneurs looking to make impactful connections?

I think there’s a superpower that all entrepreneurs can have and it has to do with sending out follow-ups. People are networking all the time with champions, potential advisers, potential employees, customers, and even with investors or other providers of capital. I think one of the things entrepreneurs can do to separate themselves is continue to follow up with everyone who they meet. You don’t want to say, “Hey, that person said I had a silly idea so I’m never going to reach out to them again.” Because unless someone says, “Don’t follow-up with me or remove me from your email list,” the door is always open to have a potential relationship and have a positive network type of activity.

My advice to entrepreneurs and anyone looking to build their network is to continually follow-up. Follow-up when you have a new insight on a market. Follow-up when you have a new thought. Follow-up with a quarterly newsletter. Follow-up with developments in your company. Follow-up as much as you can. Email is there for a reason, so leverage the power of email to send more information. I think it is really, really important and it’s something that entrepreneurs can do to separate themselves from one another, from those who are very serious and  those who obsess about their company’s success.

What is your favorite piece of technology? Zoom software is awesome.

What’s one book you’d pass along to a fellow entrepreneur? I really like The Startup Owner’s Manual by Steve Blank and Bob Dorf.

Who’s one person you’d like to make a connection with, either past or present? Governor Doug Ducey.

What’s your favorite ice breaker when you’re introducing yourself to someone new? If it’s for the fund, the icebreaker is, “Hi, my name’s Romi. I’m the Founder and Managing Director at the Arizona Founders Fund. Arizona is home to a considerable amount of technology activity. In fact, we’ve had, at our peak, 20 public technology companies which is 10x more than Utah had at their peak.” I’m always going back and forth with Utah.

How many hours of sleep do you get each night, on average? On average, I’d say I try to get eight.

How can people connect with you? Follow Arizona Founders Fund on Twitter and Instagram. LinkedIn is a way for me to communicate with other investors and to make a very, very hyper specific network. All the other places, I can be DM’d by anyone. Send me compliments and send me complaints there.