Leading the Way to a World Without Passwords 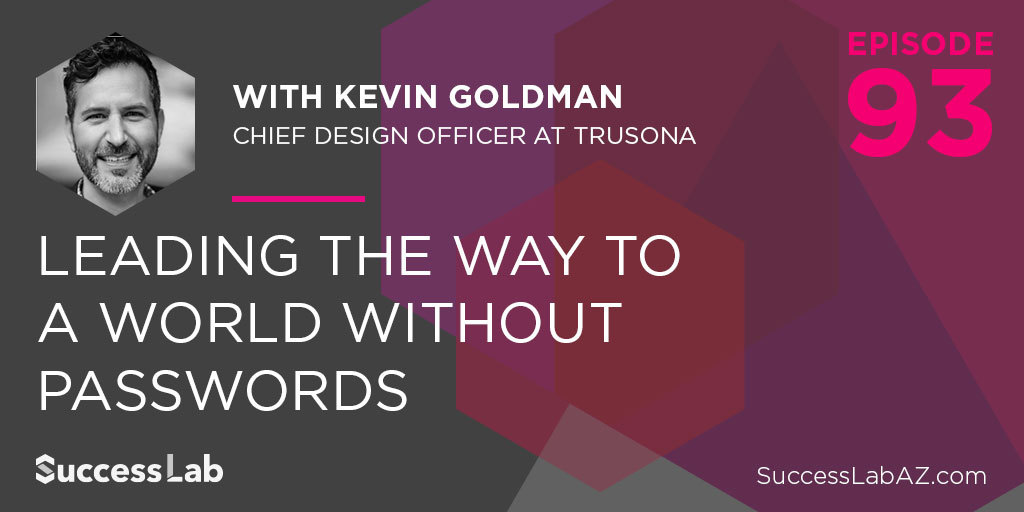 It’s not uncommon for entrepreneurs to weave storied journeys throughout their career –– and this particular one makes several interesting (an unlikely) stops. In fact, Kevin Goldman’s path is likely quite different from any you’ve heard before.

A Phoenix native and graduate of Arizona State University, Kevin left the Valley in his early 20s to see more of the world. After joining a band in Seattle with Reggie Watts, who now leads the house band for The Late Show with James Corden, Kevin spent a decade creating music and touring the country, all while running his design consulting firm. After more than a decade run with the band, and another successful startup and exit under his belt, Kevin eventually landed as Chief Design Officer at Trusona, where’s helping to lead the mission to rid the world of passwords.

In this episode of The SuccessLab Podcast, Kevin shares why he returned to Phoenix, opened his second design agency, 29th Drive, and how he connected with the team at Trusona. He also talks about prioritizing his values, who his greatest teachers have been and how he forms authentic connections while networking.

How did your career begin?

I was born and raised in Phoenix, and went to Arizona State University where I studied industrial design. At 23 or 24, I had this desire to get out of my hometown and see more of the world. I moved to Seattle and thought I might be a barista, because I didn’t have a job lined up. At that time, I had been doing design work for a year when a business colleague asked me to do some contract work. That ended up being the start of a consulting career called Goldman Design that I had for over 10 years. It really was a perfect fit because this was early in the Internet era, so it was a case of being in the right place at the right time. Seattle in 1995 was also the right place and time for music. I had played bass guitar in bands through high school and through college, and that’s when I met Reggie and Davis and Daniel Spils and all the guys in the band, and started really both careers at that time.

I spent 10 years in Seattle and lived a dual life of playing music, recording albums, touring the country and then working on fun design projects at the same time for a lot of startups in Seattle, including Microsoft. Ultimately I moved back to Phoenix and a lot of business opportunities ended up popping up. That’s when I formed a consulting firm called 29th Drive, which was later acquired.

What significant challenges have you faced as a founder and how did you overcome them?

Agencies go through times of having a lot of work and then times of not having as much work – that’s just the agency life. At 29th Drive, we asked ourselves, “Well, what are we going to do when we’re not as busy?” We decided as a team to develop and launch products. So the challenge was either keeping billable time up or making sure that we were always extracting value from the business, whether clients were there or not.

One of the products that came out of that was a product called Inkwell. It’s a physical sketch kit and it’s made for makers or for entrepreneurs. We launched it and within probably four to six months, we had sold Inkwells in 22 countries and to some of the big luminary designers around the world. They would tweet about it and were thrilled to have a physical kit that embodied the craft of design that existed away from those glowing screens in front of them. We had a lot of fun developing that and ultimately turned that physical product into a lead generation machine for the consulting business. I take that as a creative win, looking at a problem and solving it in a unique way.

How did you end up joining Trusona?

My design team did a two day design studio workshop with the Trusona team. During those two days, I met the founder of Trusona, Ori Eisen, and I thought to myself, I’d like to get to know this guy. I emailed him and asked him if he’d want to get lunch. We met at his coffee shop and immediately started talking about all the things that you’re not supposed to talk about – religion, Israel (he’s from Israel), art, music – and we really just hit it off.

So fast forward, eight months later I left where I was and came over to join Trusona as chief design officer. The mission here of getting rid of passwords is one that I can really get behind on many, many levels. Ask anybody if they love using passwords, and they’ll tell you all kinds of stories about how much they hate passwords.

But on the security side, there’s something that people don’t know a lot about or at least laymen don’t know that aren’t in the security world, is that passwords are the root cause for 81% of the breaches in the world. And if that wasn’t bad enough, these breaches, there’s a tremendous amount of money from these cyber attacks that go to global organized gangs essentially. And that money goes to child trafficking, human trafficking, drugs, weapons, you name it. So if we can eradicate passwords, we can both help with what the money is being used for from the breaches. And then of course we can also make it a little easier for people’s lives because they don’t have to create and use passwords every day.

Have there been specific people who’ve significantly shaped your journey?

Certainly with music, I learned so much from Reggie. I remember the very first day we ever jammed together, even though it was 20 years ago. But probably the most impactful connections that helped form my life were some of my yoga teachers back then in Seattle. Let me back up a little bit…

A very good friend of mine recently exposed me to David Brooks. A concept that David Brooks talks about a lot and that is the concept of virtues – there’s resume virtues, those are the things that we show on LinkedIn to say how great we are, and then there’s eulogy virtues, those are the things that people will remember you by when you’re gone. What do we really want to build up – our resume virtues or our eulogy virtues? Which do we give energy to? The biggest influencers in my life have been the ones that have helped to show me where things really matter.

Friendships, personal growth and being able to meaningfully connect with other people requires you to be comfortable in your own skin. Eve Nyman was my yoga teacher in Seattle for probably 10 years and she taught me so much about some of these things that end up affecting the rest of my life, including the business side of my life.

How have you successfully made impactful connections over the years, from your band to your business, considering they’re both totally different audiences?

If there’s one thing that comes to mind around making impactful connections, it’s about knowing yourself and being sincere about what your intentions are when you meet people in the business world or in your personal life. If you’re out there networking and you want a job, don’t buddy up to somebody because you’re hoping to get a job. Be sincere if you are interested in that person as a potential friend and be sincere about that. At the same time, if you are also sincere about getting a job through a connection that they have, be sincere about that and let them know like, “Hey, I want you in my life.” Or, “Can we hang out once a month?” But also be up front and say, “Hey, I’m thinking about making a career change and if you know something, I’d really appreciate it if you kept me in mind.”

That sincerity I think is the most important thing. That dynamic can really go sideways when there’s alternative motives that aren’t spoken about. Take the time to meditate on why you’re spending time with the people you’re spending time with, why you reach out to the people that you reach out to and what you communicate with them. There’s a lot of people that I network with that I may have some business relationship with, but they’re also friends. It is very important to me to keep the communication clear on both sides.

What’s one piece of advice you would pass along to a fellow entrepreneur or designer looking to make impactful connections?

Surround yourself with people that have a lot more experience than you. It turns into good things. Especially when you’re young and first starting your career, try to be the worst one amongst your group of colleagues because you’ll learn so much and it will get you out of your comfort zone. The second thing is to be sincere and be present when you’re in those situations.

Are you a coffee drinker? No. Occasionally I drink tea.

What’s one business tool you’re geeking out over right now? Pen and paper.

What’s your favorite piece of technology? My Android phone, Pixel.

What’s one book you’d pass along to an entrepreneur? That’d be too hard, so I’ll just tell you a book I’ve been reading. It’s called Iron John by Robert Bly. It’s the book I bring up in every conversation that I have right now. It’s not a business book, but it’s really, really wonderful. I’m reading it because I’m wrapping my head around masculinity in the United States and what it all means. We’re at a really crazy time between our president and the #MeToo movement. There are really a lot of changing dynamics in our culture.

Who is one person you’d like to make a connection with? Most of the time when I meet somebody I want to connect with, I end up reaching out to them.

What’s your favorite ice breaker when you’re introducing yourself to someone new?  I say, “Hey, I’m Kevin,” and give some context for where I’m at or what a connection might be. Or, “Hey, I noticed you have this interesting book that you’re reading.” Or, “Hey, I’m Kevin, you got a few minutes to talk about X, Y, Z in the next month?”

Which brand do you think has the overall best design? Airbnb is probably one because when you say design, people think pixels and what things look like. But it is the entire end-to-end experience with the brand. I’d say Airbnb does it really well.

How many hours of sleep do you get each night, on average? Eight. Sometimes I need to do 12 and then there are times where I get six or seven, but eight is the number.

Will there be a Maktub reunion in the future? Probably not. Occasionally it’s talked about, but we haven’t played in a long, long time. It would be a lot of fun. But people are scattered all over the place now and so I don’t know. We’ll see.

How can people connect with you? The best way to connect is at trusona.com. If you want to see what it looks like to have a passwordless login, you just go download our app in either of the app stores and it’ll direct you to a demo where you can log in without a password. You can also connect with me on Twitter and LinkedIn.