Making Bets on Yourself with Paul Roetzer 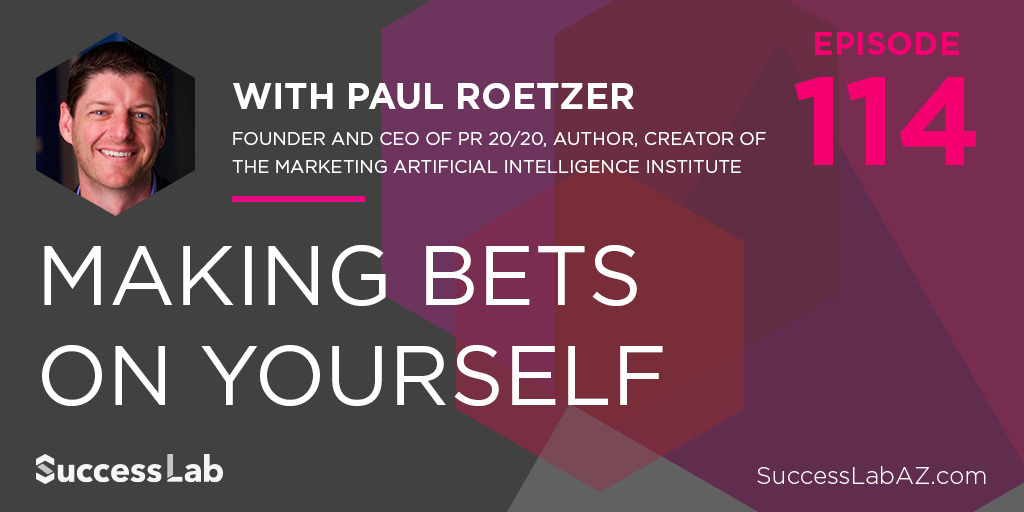 When something is broken, oftentimes, the natural instinct is to turn a blind eye and hope someone else will fix it — but this wasn’t the case for Paul Roetzer. While working at a public relations agency early in his career, Paul was having a hard time reconciling the services he was providing for clients with the cost of their retainers. So, he set to work on a solution that would standardize PR services and prices. And in 2005, Paul launched PR 20/20, a marketing consulting and services firm that became the first firm in HubSpot’s certified partner program which now includes thousands of agencies from around the world.

According to Paul, success isn’t solely financial — it’s about bringing true value to others and aligning yourself with people who have a similar take on life. He truly believes his career successes — from growing PR 20/20 to authoring two books (The Marketing Performance Blueprint and The Marketing Agency Blueprint) to launching the Marketing Artificial Intelligence Institute — is a direct indication of this.

In this episode, Paul discusses why getting uncomfortable and making small bets on yourself is one of the best ways to fuel your career and achieve the goals you set for yourself. This mindset has helped him successfully manage the rapid growth of PR 20/20 while dealing with the tragic passing of his best friend — an event that forever changed his perspective on life and business.

In the early 2000s, I was working at a PR agency and I didn’t really understand the business model. Everything was billable hours and in my young mind, it didn’t make sense. I would send invoices to clients every month and it’d be a block of text of all the things we did. The client would call me and say, “this looks great, but what did we get for $12,000 last month?”. I wanted this process to be more tangible for myself and for clients, so I started working on this idea of standardized services and set pricing.

“PR 20/20” was originally a paper I wrote about how the industry needed a new vision for how it did everything. A year and a half after writing it, I went home and told my wife that I’m going to start a business. She said, “okay, what does that mean?”. I said, “I don’t know, but I’ll make sure we have health insurance and a paycheck when I do.” That was a Wednesday and on that Sunday, I got a $25,000 loan from a family member and I started the business two weeks later.

What was one of your darkest moments, and how did you emerge from it?

I was 27 when I started the agency. I didn’t have any kids and my wife and I had been married for four or five years at that point. Life was pretty good and then my father-in-law passed away suddenly of cancer. We tried to figure out how to move on with life after that and then the following year, my best friend died in a tragic accident. Here I was in the midst of 100% growth, and from the outside, it seemed as though I had everything figured out. On the inside, I was a wreck and was trying to figure out how to piece together the next day. I threw myself into business even harder because it became my escape and the growth distracted me from dealing with the reality of life.

It was the reality that took me a long time to kind of come to grips with. No one wants to live through that stuff, but I have a totally different perspective on life and business once I eventually made it through.

What has been one of the best things you’ve done for the business to grow it?

I made a bet on HubSpot in the very early days. I think what I’ve done well in my career is finding people I wanted to surround myself with — people who had really interesting visions and who I thought had the will to see them through. HubSpot was very much a bet on its people, not on its technology. I truly believed Brian Halligan and Dharmesh Shah were committed to building a different kind of company and eventually a much better product that would help our clients and us. Many of the doors that opened in my life — like writing books to eventually moving into the AI space — came from these early days and the relationships I built at HubSpot.

How have you managed to juggle the growth and sustainability of both 20/20 and the Marketing Artificial Intelligence Institute?

Part of the way I balance everything is that I never get too high or too low on anything because stuff goes sideways all the time. I teach my team that when something goes sideways, you can’t get caught up in the totality of the thing that went wrong. You have to break that thing into little pieces — and then attack those pieces and solve them one at a time. As long as you stay focused on the thing you can actually affect, then you don’t get caught up in the bigger problem that can make you feel overwhelmed.

Are there one or two connections you’ve made along your journey that made a big impact?

Dharmesh Shah and Brian Halligan at HubSpot. They’re just good people. Jay Baer also comes to mind. He is one of those people who is bigger than life on stage, but is probably a 10 times better person in real life. Other people I can think of include Ann Handley, David Meerman Scott, Mitch Joel, Marcus Sheridan, Joe Pulizzi, and Andrew Davis — they’re just incredible humans. I’ve been really lucky to not only become peers with them on the speaking circuit and in the author world, but actually become friends with them to the point where we can grab dinner, jump on a call or drop a text message. They’ve always been there and that’s just the kind of people they are.

What’s advice would you have for fellow entrepreneurs looking to launch a side hustle or second business?

Having talked to a lot of entrepreneurs, they think success is what their family, friends, peers or competitors think of what they’re building, but none of their opinions matter. I think not enough successful entrepreneurs tell the emerging entrepreneurs that they get to define their own success, so that would be my takeaway for them.