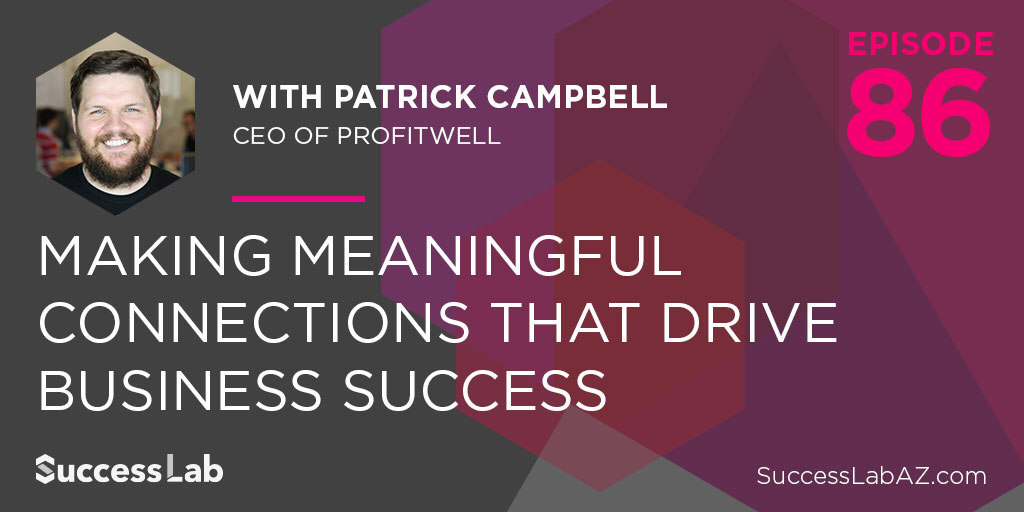 Behind every great entrepreneur there is usually someone (or several someones) who helped guide them on the path to achieving greatness. Many entrepreneurs credit teachers, mentors and colleagues who left a lasting impression, changing the course of their lives in some meaningful way. That’s been the case for Patrick Campbell as he transitioned from working for the government, to Google to the start-up world and eventually founding his own company.

Today, Patrick is the CEO of ProfitWell, a subscription software that helps companies achieve faster recurring revenue growth. In this interview, Patrick discusses how his restlessness with bureaucracy led him to start his own company, how a handful of individuals helped shaped his leadership style and why developing high-value content is ProfitWell’s ticket to building trust with stakeholders. He also shares why authenticity should be embraced in the workplace and why he always tries to see the best in people.

Can you tell us about your journey and how ProfitWell came to be?

My background is in econometrics and math. I worked in U.S. intelligence after school in D.C., then at Google here in Boston. I ended up getting disenchanted with bureaucratic companies – being a young, punk kid who wanted to take on big problems, it was tough to be patient. I decided to join the startup scene, mainly because I was young enough and thought, “If I’m going to take a risk I might as well do it now.” I ended up working for a small company that raised a good portion of money in Boston, but while there I learned that small companies can have their own culture issues as well. That’s when I had that moment of, “Well, let me try something on my own,” and jumped out.

One of the projects I worked on was pricing. I realized the people didn’t know what they were doing – and I didn’t know what I was doing – but it was really, really important, and so that was our first product. That’s why the original company name was Price Intelligently.

We kind of bumped around, helping all types of different companies collect data to help them with their pricing strategy. Then it quickly moved into something where we focused on subscription companies specifically. That led to us building ProfitWell Metrics, which is our metrics product that you can plug in any billing system and get access to free subscription metrics. That led to more products that we built for the subscription economy.

You know the saying that people start to look like their dogs? Well, a company, especially in the early days, kind of looks and acts like the founders. For me, that was very, very much the case. In the early days, things were a little frantic. We took on a little bit more than we probably should have. We were doing a bunch of different things because I was very much like, “Oh, I just need to work more. I just need to work harder.” So it wasn’t without its challenges.

Who would you say helped impact the success of ProfitWell or changed your path completely?

There’s one person that I think truly changed my life. It was one of my first managers,  Deran Dewin at Google. I was a young punk kid trying to be super, super ambitious, work hard, take on bigger problems and find bigger opportunities. He was known as the manager that you didn’t want to report to if you wanted to change roles or get promoted, mainly because he wasn’t as numbers focused as some of the other managers. I found out that was not true, but when I got assigned to him, I was like, “Aw man, I got the fluffy manager who cares about me and how I’m doing and these types of things.” How big of a butthead must I have been to not appreciate that? In reality, now that I manage people, I really appreciate that and know that’s what you have to do.

At the time I was a very negatively motivated person.  Tell me I can’t or tell me I’m failing, which is not really healthy. He was someone who came along and asked, “How do we make you positively motivated?” He took the time to figure out, how do we find things to look forward to rather than things you’re trying to run away from? That was really high impact because no one had really talked to me about that before.

The other thing he had talked to me about before was this whole concept of authenticity and work. I think that a lot of people try to be someone completely different at home versus at work. Some compartmentalization and some boundaries are obviously good and okay, but the problem with being a different person is that it doesn’t scale really well. Inevitably there’s going to be fractures in that boundary. You’re going to build resentment on one side or the other because basically you’re living these two lives.

So if I managed or lead the way that I thought managers were supposed to manage and lead before meeting him, I 100% would have failed. There’s no question. It just wouldn’t have worked out. We might have had some success because I don’t think that that’s the only thing that leads to success, but I do think it’s a major part in contributing to that.

In addition to how you’ve evolved as a leader, have there been other key events or people along the way that helped shape the evolution of ProfitWell?

One that I think was really high impact was Peter Zotto, GM of the Price Intelligence product. Peter was the neighbor of my ex-girlfriend. At the time there was a huge Boston snowstorm, and whenever that happens everyone kind of ends up staying home or going to bars that are open. That’s where I met him and brought him on. The reason he was so impactful was because he took away a lot of the pain and the work, but he also was just as committed as I was, which was a hard bar. He also was willing to put up with all of the BS of early stage bootstrapping a company.

In those early days, how did you make impactful connections with potential clients and users?

There’s always been the advice of “Networking isn’t as good. Don’t go to events, just focus on product. Work, work, work, work, work.” But because I didn’t know at the time, I would reach out to people, learn from people, go get coffee, do a lot of these things while also doing all of the other work. And I think a really big thing that led to us being successful and building relationships is I would literally take almost any call. I still kind of do that today and I think that helps engender a lot of trust with people.  We also do these pricing optimization assessments for people. It is a lead magnet, but it also provides a ton of value for people. We’re very upfront, explaining “Hey, at the end of this it’ll be obvious if we should work together or not, but even if we don’t, you’re going to get a ton of value.”

What’s one of the best things you’ve done to propel growth at ProfitWell?

One of the smartest things we did for growth was making a commitment to good content. We were probably a little bit overzealous on what was good content versus bad content. But not writing listicals or basic SEO content was really important. Because of that, we engendered a lot of trust, a lot of knowledge, and went from a place of, “Oh, these people are really helpful,” to “Oh, they’re helpful and they’re smart,” which I think was a good combination.

It was also a wise thing from an investment standpoint because at this point we think about content as if we’re building a media property. It doesn’t look like that on the site right now, but that’s what we’re trending toward and having that mindset has really helped us propel the company and propel the brand forward.

What is one of the most important lessons you’ve learned along the way?

What’s one piece of advice you would give to a fellow entrepreneur who’s looking to make impactful connections?

Set aside time each week. If you’re early stage, set a little bit more time than maybe you’re comfortable with. Later stages have a little bit less time, but set aside specific time that you try to fill. So maybe it’s two hours a week in addition to your work. For instance, I’m going to go to a meet up this week. If there’s no meet up, then reach out to people and start building relationships. Then ultimately when you’re making those contacts with people, be your authentic self.

Are you a coffee drinker? Too much, yes.

What’s one business tool you’re geeking out over right now? I’ve been geeking out a lot about Notion, which I know is all the rage right now.

What is your favorite piece of technology? My noise cancelling headphones.

What’s one book you’d pass along to a fellow entrepreneur? High Output Management by Andy Grove. It’s such a good book, whether you’re going from five people to 20 people or from 20 people to 150 people. It’s super, super, super useful.

Who’s one person you’d like to make a connection with, either past or present? Hyman Rickover. He’s known as the father of the modern United States Navy. What’s interesting is in the past 60 to 70 years, the Navy has become the world’s armada, right? He was a guy who focused so much on organization, decentralizing decision making, attention to detail, all of these different things. I’d love to just meet him and have a meal with him to understand how he approached that, and if it was something where he was as thoughtful as a lot of people give him credit for.

What’s your favorite ice breaker when you’re introducing yourself to someone new? In all of the final interviews at ProfitWell I ask people what their five happiest life moments are. I didn’t make this up. I stole it from someone who stole it from someone who I think stole it from Zappos. People don’t normally think of the positive things – they think about the worst moments of their life. And I think you can tell a lot by how people answer that question. Are all of their things relating to their family? Are all their things relating to achievement? You can learn a ton about that individual.

How many hours of sleep do you get each night, on average? The past couple of months, I’ve been averaging probably close to seven, seven and a half.

How can people connect with you? On LinkedIn. If you ever have any questions or want any answers, pc@profitwell.com is a great place to find me.