On a Mission to Help Others Discover Their Career Blindspots 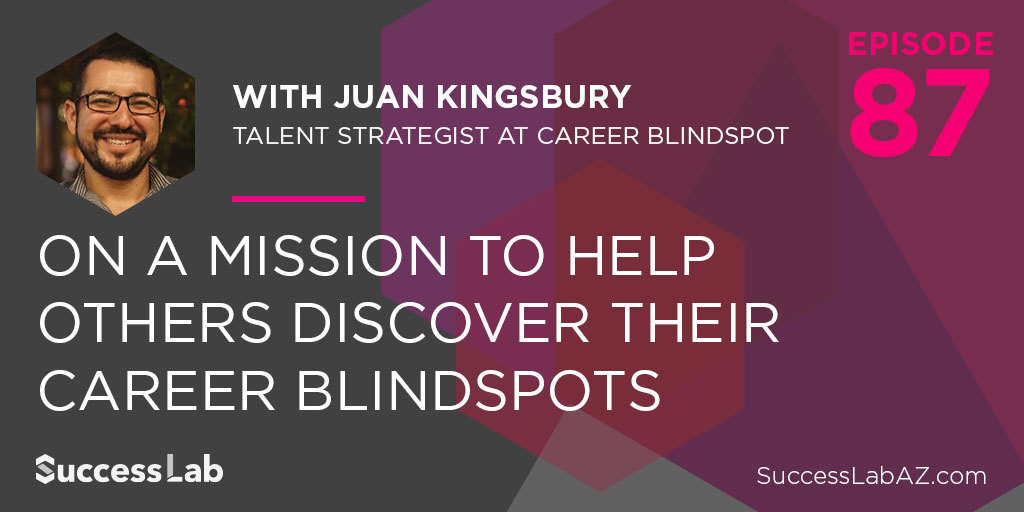 There is a big difference between being capable of your job and simply crushing it. That’s the concept Juan Kingsbury, Talent Strategist at Career Blindspot, wants employers and employees to identify – in fact, it’s what he’s staked his career on.

There’s no question most entrepreneurs have a clear sense of their mission and vision, but what about their team’s mission as individuals? Juan works with businesses to discover the overlooked potential within their teams. From there he helps leaders uncover new opportunities and actionable insights to help organizations improve how they hire, develop and grow their teams.

In this interview, Juan shares why understanding an individual’s mission is critical to the success of an entire team, why most people aren’t fully satisfied with their jobs and why companies need to focus on hiring the people who want to do the work the job actually requires. He also discusses why sincerity is the key to effective networking, the reason he goes above and beyond what his job calls for and the importance of finding your personal mission.

What do you do as a talent strategist?

I primarily work with smaller businesses and mission obsessed leaders and help them strategize the talent they currently have and the talent they’re going to be bringing on. Everyone has talent, skills and experience, but what do they do with it? Sometimes people take sales jobs that they don’t really like or they get into a certain industry or niche and it doesn’t quite jive. It’s very easy to point the finger but ultimately it’s often that the person doesn’t have a good idea of what their talent is and, more importantly, what to do with it. Being a talent strategist is essentially helping people make smarter decisions with what they are naturally good at.

How did Career Blindspot come to be?

You might be familiar with the DISC assessment. A lot of companies out there use a version of that or the Myers Briggs test. I worked at a company in North Scottsdale called TTI where I was brought in as a customer support person and helped other consultants anytime they had technical issues. TTI is very different and beyond DISC – DISC is not personality test, it’s simply a behavioral choice or preference. TTI goes farther and adds in all these other assessments to determine motivation, emotional intelligence skills, et cetera.

To me this made a lot of sense, and in 2013 I ventured out with Career Blindspot. Now I use these tools to help people do the work that they care about, that the company cares about and that the clients care about. This entails strategizing the right talent for the right work for the right company and the right mission.

A lot of people can do a lot of jobs. You can force yourself and you can learn something because you’ve got to pay your bills. But there are very few things that we actually want to crush. Employers want someone who’s going to thrive, and these tools are helpful in organizations hiring people who actually want to do the work that needs to be done.

Who would you say has helped shape your journey with Career Blindspot?

There’s one guy, Justin Foster, who was in sales and branding and now has this company called Route & River which is very focused on leaders who are really good at their business but need help connecting their heart to their message. I’m sure I drove him nuts for a while, but he helped me find my true north. I knew I should be in business because I like business, but why? I could make a lot of money just selling DISC assessments, which would be fine. But Justin was always there to kind of be like, “Are you really telling the truth?” He’s a great guy and has connected me with tons of people.

How do you go about networking in a genuine way?

Most of the time, the way I stay connected is through being genuinely interested in the people I’m already friends with and asking them what they’re doing or what they’re working on. Afterwards I’ll be mulling it over and then all of a sudden when I’m eating my lunch, I’ll think, “Oh, I should tell her to talk to him about that” and then make it a point to make an introduction. But it starts with caring about the 500 or so connections I already have and then seeing how I can get them to hang out and play. I love it when people I know are going and having fun without me. That’s my approach to networking, trying to connect people with other people I already know.

What is one piece of advice you would give to a fellow entrepreneur?

Look for someone who compliments you. You have your Steve Jobs and then you have your Wozniak. You have your Michael Jordan and then you have your Scottie Pippin. If you’re an entrepreneur, look for someone who compliments you, not necessarily the opposite of you. Sometimes your opposite, especially when you’re trying to grow, is too opposite and will try to rein you back. Instead, you want to find someone who’s in line with your mission. Also, being an entrepreneur is very different than being the leader of a company. It takes a different skill set.

I’ve met a lot of people who are overly controlling because it’s their baby that they’re building, but they don’t have enough time to do it all. They need to be willing to let someone else help lead the team. The book Traction talks about the visionary versus the implementer. Are you someone who has the idea or are you someone who rallies the troops and is more of the operational person? And you can be both. You might be capable at being both, but you don’t want to be capable. You want to crush it. So find someone else who’s going to crush the other thing so you can crush yours.

What is your favorite piece of technology? I have an aura ring. It’s a sleep tracker on my wedding ring finger.

What’s one book you’d pass along to a fellow entrepreneur? Tribal Leadership.

Who’s one person you’d like to make a connection with, either past or present? Dave Asprey, the Bulletproof Coffee guy. I met him in a bathroom at his conference once, but I’m not technically connected to him.

What’s your favorite ice breaker when you’re introducing yourself to someone new? I like asking negative questions. What do you hate the most? What’s your biggest pet peeve about blank, whatever the subject is.

How many hours of sleep do you get each night, on average? Well, according to my ring, I average probably about seven and a half.

Sidenote: Juan is looking for guests for his podcast. If you’re an entrepreneur or COO and are responsible for the growth and people in your organization, visit www.careerblindspot.com and let him know you’d like to be a guest.