How Being Open, Honest and Curious Pays Greater Dividends 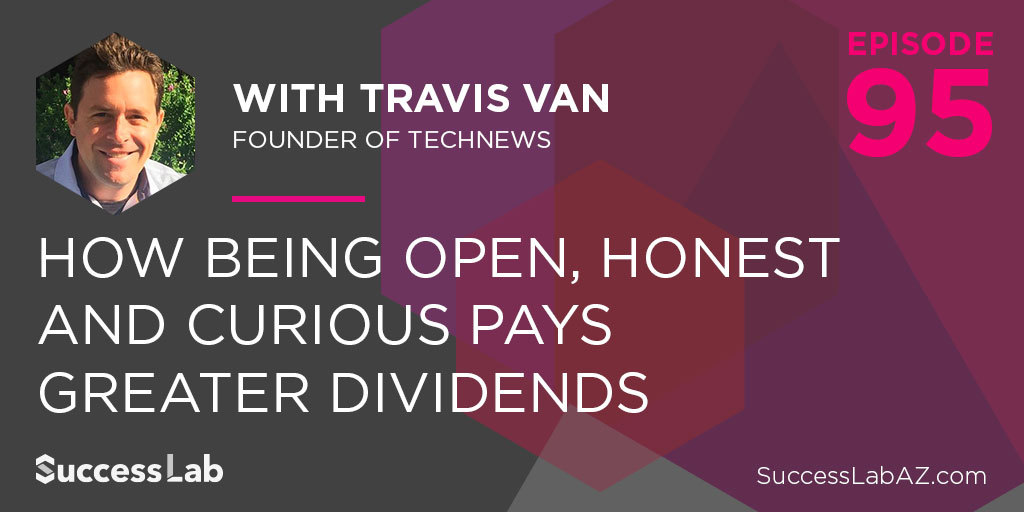 Oftentimes, we encounter guests on this show who had never envisioned an entrepreneurial career for themselves until they were actually doing it. And it isn’t uncommon for these journeys to take a meandering approach, replete with twists, turns, setbacks and big wins. Travis Van can attest to this.

Travis earned a degree in journalism, went on to become a public relations manager, and then became employee number three at MuleSoft. Having never worked at a technology company, MuleSoft opened a number of doors for Travis and gave him the confidence he needed to eventually embark on his own venture. Today, Travis is the founder of TechNews (formerly known as IT Database), a software platform built specifically for tech companies to organize their public relations programs.

On this episode of The SuccessLab Podcast, Travis talks about his storied entrepreneurial journey and the biggest challenges he faced as a non-technical person starting a software company.

Can you walk us through your journey?

I went through the first couple of years of college doing the bare minimum to get by and enjoying myself quite a bit. Then I found myself in an intro to journalism class, which was actually pretty boring. But once we got into the reporting classes, I loved it.

As I neared the finish, I was required to do some internships so I worked for the state Senate majority in Denver and took another internship where I covered the sports section of the Longmont Times-Call. It was interesting to see the people in the newsroom and the life they lived, but I realized that the money I’d make as a journalist didn’t work with what I wanted in life. It sounds brutal to make that decision on the basis of something like money, because I actually really believe in the importance of journalism in society, but I made the calculation and stuck with my decision.

I ended up moving to San Francisco in 2000 and happened to go to this PR job fair on a total whim. I met an HR recruiter and essentially talked my way into an interview with a PR firm, which turned out to be one of the hotter firms in the Valley. They actually launched Yahoo, which was their calling card. I started as an account coordinator and was put on an account that was basically the runt of the company. The very first media win I secured for them was a Q&A with Businessweek, and it was thrilling. I worked on a couple other clients after that before the dot-com industry imploded in 2008.

It got very difficult to be a PR person at that time, so I had to figure out what to do next. I ended up working for an events company which is how I met Dave Rosenberg, the company’s conference director who put together all the content tracks for the events. Later on, I joined him and his co-founder, Ross Mason, at a company they created called MuleSource. They later rebranded the company to MuleSoft. I was there for the first year and ended up leaving to start my own company.

What helped me was avoiding things that I viewed as uninteresting or things that made me miserable, in addition to people who made me miserable. I see a lot of people, even today, who I feel are sticking out things that aren’t in their best interest, which makes them miserable. I don’t indulge in those types of personal relationships. Instead, I focus on getting to know women and men I find admirable and who I want to be like. I learn a lot from osmosis by just being in proximity to people like that. When you’re genuinely curious and ask questions of the people you admire, you can learn a lot really quickly.

What’s been the biggest challenge you’ve overcome as a tech founder?

I loved working with him, but after we launched the product, he passed away unexpectedly and it was awful. I was not only dealing with the emotions of losing a friend, but also knowing I didn’t understand our product well enough to keep operating it. I had to immediately find someone who could develop the platform and who understood cloud infrastructure.

I got taken for a ride by a couple of people and I lost a lot of time and money during those cycles. It was really hard to survive that. I’ve got two young kids and a wife, so I had a crippling amount of anxiety related to surviving that juncture. It forced me to spend a lot of money on things that I had earmarked for other purposes. When we actually got to a level of stability, it had really taken its toll. It was brutally difficult.

I think that the other part of the whole dynamic of being a non-technical co-founder is that you’re basically required to trust someone really well –– their honesty, their integrity, and how hard they work. I ended up recruiting a guy that I really respected from MuleSoft who eventually joined us as a co-founder of the company. It’s been an awesome relationship. There’s a reason why I think venture capitalists are preoccupied with companies led by two co-founders. There’s got to be somebody who understands the market you’re selling to and then there’s got to be somebody rock solid on the technical side.

What keeps you up at night?

The years going by. None of us perfectly understand what we’re doing here on Earth. You take satisfaction in your relationships and you want your career to have a lasting impression. At the end, you want to know you did something that mattered. I have this huge list of things that I want to do and put into our product and the years are just flying by. I guess that’s what really concerns me is that sense of not being able to better control things and go faster. Especially when you have kids, it’s unbelievable how fast things fly by. That’s a sign of a good life, too, that things are busy enough and rich enough that the years go by so quickly.

You have to believe in your instincts. Your instincts on why you started a company have a lot of power –– trust that. When you start looking too much to external sources to validate what you think matters, you can get extremely confused. Make the best of what you believe in and go out there.

It also helps to be genuinely curious. I’m kind of insecure about being exposed when it comes to things I don’t know. I like to ask a lot of questions and readily admit when I have no idea what I’m talking about. It’s worked really well in a networking capacity. People are generally receptive to honesty and they like to talk about things they care about. If you can clue in on this and appear genuinely interested, you get a lot out of people. I think that’s a much better way to look at the world than thinking, “How can this person help me?”

Are you a coffee drinker? Absolutely, yes.

One business tool you’re geeking out over right now? I really love Streak. Another one is Mixmax. There’s some really cool stuff about hacking the way you deal with the datasets of the people you’re trying to engage and track.

Favorite piece of technology? Server-less stuff like Next.js and the React Stack. I think things like these that get operations out of the way so developers can easily deploy code without having to think about servers and interface is going to be a really big deal.

What’s one news outlet you’d pass along to a fellow entrepreneur? I’d have to say Feedly because I read everything. I look at press releases. I look at recently funded companies. I look at Hacker News.

One person you’d like to make a connection with? Reid Hoffman. I think LinkedIn is an amazing tool.

What’s your favorite icebreaker? I like to ask people where they are from. That says a lot about somebody. Most people have such a strong affinity with where they grew up, what neighborhood they live in. I think people open up differently on that line of questioning than if you were to ask, “What do you do for work?”

How many hours of sleep do you get each night, on average? I’m an old man. I need some sleep or I get really grumpy. I need about eight hours. I think I could probably use 10 hours, to be honest.

How can people connect with you? Email me at travis@technews.io.