Overcoming Entrepreneurial Hardships By Facing Them Head On 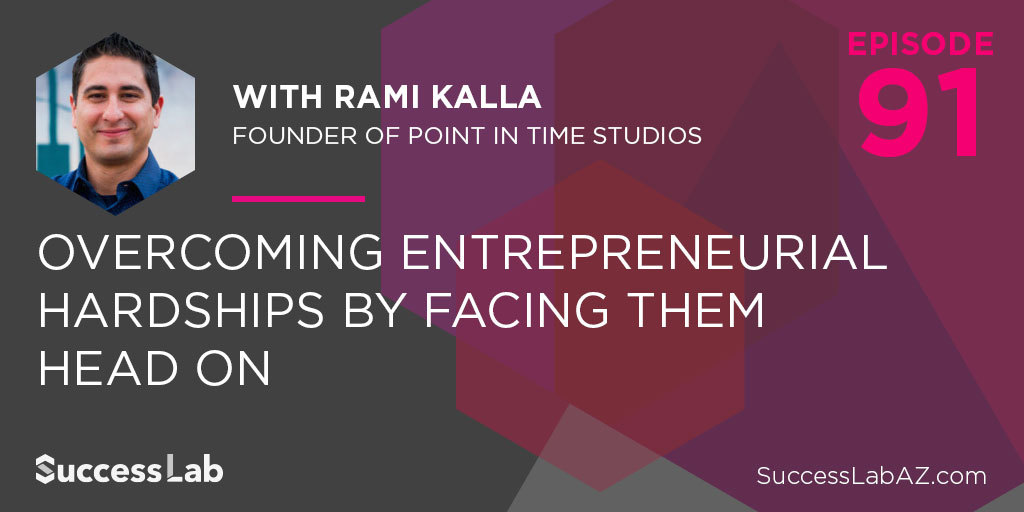 Risk taking is an inherent part of being an entrepreneur. The trick is, risk taking requires a delicate balance between calculation and gumption –– and even then, the outcome is not always predictable.  And when it doesn’t work out, you have to be able to pick up the pieces and come back stronger.

How do you learn to navigate these murky waters and not let the tough times drag you under? For  Rami Kalla, it took surrounding himself with the right people.

Rami is the founder of Point in Time Studios, a thriving video production company based in Tempe that specializes in video, virtual reality and 3D animation. After more than 16 years in business, Rami has endured his share of obstacles, but it’s been his tribe and relentlessly positive mindset that have helped him scale the business to all new heights.

In this episode of The SuccessLab Podcast, Rami explains how leaving the corporate world opened up the path to following his passion, why entrepreneurs need to lean on one another to ride out their highs and lows, and why showing up and dealing with struggles head on is the only way through.

What led you to start Point in Time Studios?

My journey started when I was about 10 years old and my father brought home one of those old camcorders. I fell in love with it and started making short films with my friends and family, including writing scripts and creating little movies. I didn’t know at the time it was going to lead me to what I do now.

I went to ASU and studied business and Spanish, then worked for General Mills doing marketing. A few years into that I became very disenchanted with the whole corporate environment and realized I wasn’t really living my dream and pursuing my passion, so I started to look into video production and how to turn something I love into a business. As I did research, I found there was a need for quality video production that provided a great product and great service. We started doing a lot of small corporate events, private events, and local commercials. From there, we started working with large companies like Coca-Cola, McDonald’s, Ford and PetSmart.

Over the last several years, we’ve been getting to work internationally doing virtual and augmented reality, as well as video, for companies from L.A. to London. It’s been a really fun experience and I’m very humbled to make a living doing what I love.

What is one of the best things you’ve done to take Point in Time Studios to the next level?

One of the things that I did, right toward the end of the recession, was join a mastermind group. I had gone to business school and worked for a large company, but didn’t have a lot of experience as an entrepreneur. I was operating from an island making decisions based off the limited knowledge I had.

I ended up being introduced to EO Accelerator through a friend. At the time, the hardest thing for me was admitting my faults. I was very proud, had a bit of an ego and I didn’t want to admit the financial mistakes that I had made. Eventually I opened up and said, “Here’s the things that I’m struggling with, and here’s the mistakes I made.” Half the room said, “Yeah, I’ve gone through the same thing, myself, and I know exactly what you’re going through.” That was really a turning point for me, when I not only joined the group but I got vulnerable, and I realized that I don’t have to know everything, I do have a lot to learn, and I was able to experience-share from other people in the room.

What’s been your experience riding the highs and lows of entrepreneurship?

I’ll be vulnerable here. In 2008-2009, I had built a 3,000-square-foot studio in downtown Phoenix and invested around $100,000 into creating it. I was going to build a stage so other companies coming into Phoenix and local companies could rent it out for music videos and films, and things like that. Of course the timing was awful – I built this big facility and it was crickets. Money was extremely tight. I had to let half my staff go. At the lowest point, I had $1.1 million in total debt, and I went to Burger King to get a Whopper and I couldn’t afford it. I didn’t have enough money to buy a hamburger and I was hungry, and I had three kids to feed at the time.

I realized at that time I’d taken a lot of risks – I wasn’t afraid of risk, but they weren’t calculated risks. I had gone way too much into debt and hadn’t really understood the repercussions of the things that I was doing. It took years to really dig out of it, pay off a lot of that debt and get the business back on track. As a business owner, you have to take risks. You’ve got to take some risks to grow. But don’t take so much risk that you can’t recover from things like a downturn or other challenges.

How did you keep yourself motivated to recover from setbacks?

A lot of people told me to just declare bankruptcy, hide behind the courts and just wipe all that debt. But I said, “No, I’m not going to do that. I created this mess and I’m going to clean it up.” I called the banks and credit companies and worked out repayment plans. I made sure to exercise and make sure I was taking care of myself for my health, because, if you don’t do those things, it’s very hard to keep a positive attitude. I also surrounded myself with positive people. I got really clear on who I wanted in my inner circle and who I didn’t. If you were a negative person and attracted negativity, I didn’t want you around.

It seems like a simple formula, but, so often, as entrepreneurs and as humans, we like to put our head in the sand and hope things get better. But you have to get up and deal with things, and that’s what I did.

On to networking, how do you go about building genuine connections?

From a business perspective, I had it wrong in the beginning. I would go to networking events and I’d bring a stack of cards, and I would tell myself, “Okay, I need to get 10 business cards from other business owners at this event.” Then I realized I was getting a high volume of cards, but I wasn’t creating genuine connections. I was looking at it more as quantity, not quality.

Now I tell people if you’re going to a networking event and you’re not being authentic, or you’re out to get something, people’s walls will go up right away. But if you’re genuinely trying to connect with people, then you’re just planting a seed. It may not turn into business right away. It could be one year, two years or five years, but things come around. Start conversations and take time to really care about others. Be authentic and just enjoy the journey.

What’s one of the best ways you go about making impactful connections?

Find what works best for you in your industry. A long time ago, my friend Jay Feitlinger said, “Fish where the fish are at.” You’ve got to figure out what your business is about, including your mission and your vision. Then decide what niche do you want to play in and focus on that space.

My mistake early on was trying to be a video company for every company and every market. But then someone said to me, “If you’re going to go in for brain surgery, are you going to a generalist or a specialist?” I’m not going to go to my family doctor for brain surgery. And brain surgeons make more money, because they specialize in what they do. I realized that I needed to specialize in a specific industry if I was going to command the money I wanted to make. I picked a couple niches I really enjoyed and showed up. I learned that if you do a great job, people will refer you to other people in an industry.

What’s one piece of advice you can give to fellow entrepreneurs looking to make impactful connections?

Most of us don’t have huge budgets for marketing and networking, so it’s important to find our niche. Look locally and see if there’s a group or industry you want to be a part of, whether it’s construction companies or accounting firms or whatever. Then find out what they’re involved with and show up to those events. Go there, network, learn the industry, learn the people, and then, if it’s something you feel like you can invest in, then get a booth. Start to build your presence there but the key is showing up.

Half the battle for networking and meeting new people is just showing up. So many of us have this fear of going to these events or being a part of them. By just showing up, you’ll inevitably make connections and you’ll meet awesome people in your industry. And, again, for me, I grew those relationships in not just showing up, but then exhibiting, and speaking at events, and sponsoring events, and all those things that I recommend doing. But, again, start small if you’ve got a small budget and work your way into it, and you’ll find that the payoffs will be huge.

Are you a coffee drinker? No, I’m a tea drinker.

What’s one business tool you’re geeking out over right now? I would say monitorbacklinks.com. I’ve been geeking out over that, just creating more backlinks for our website and monitoring them.

What is your favorite piece of technology? Anything virtual reality related. Microsoft HoloLens 2 just came out, and that one’s pretty cool.

What’s one book you’d pass along to a fellow entrepreneur? I have two: Think and Grow Rich and The E-Myth. If you’re starting your business, definitely read those.

Who is one person you’d like to make a connection with, either past or present? The leadership team over at Facebook. I’d like to talk to them about their vision for virtual augmented reality and kind of where they’re taking Facebook, and their plans, and really where they see the future for VR and AR, because we’re invested heavily in it.

What’s your favorite ice breaker when you’re introducing yourself to someone new? This is going to sound really cheesy, but I always start with the weather. I know that sounds really silly. But because I talk to people all over the world, many get a kick out of Arizona and how hot it is.

How can people connect with you? Rami@pointintimestudios.com