From Small-Town Paper to CNBC: One Reporter’s Relentless Hustle to the Top 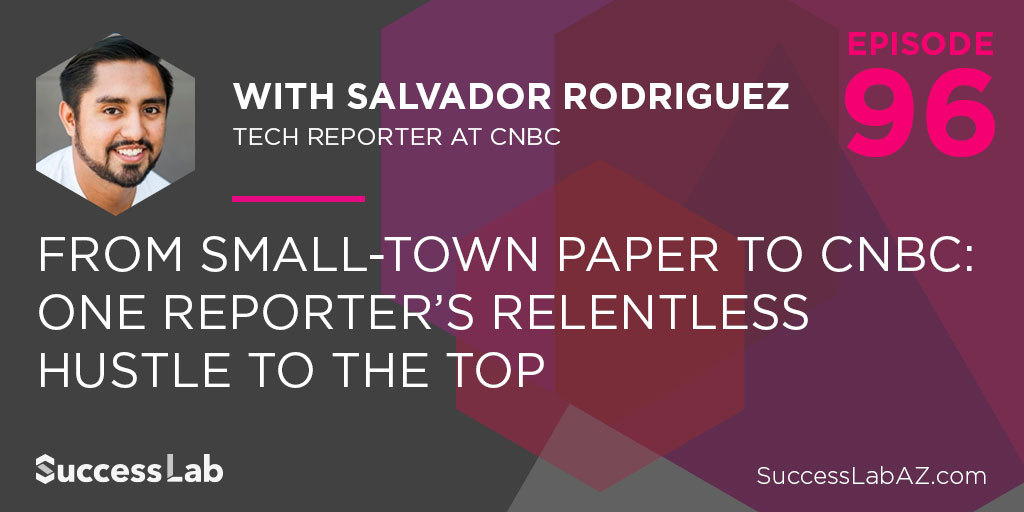 Social media has completely rewired our society. It’s given new meaning to “breaking news”, and given us new ways to share, engage and express ourselves. But it’s also had a pervasive impact on the economy, politics, international relations, all corners of society, and the list goes on. Nobody has a better front-row seat to this activity than the journalists covering these beats.

Salvador Rodriguez (aka Sal) is one such journalist. He is a tech reporter for the San Francisco Bureau of CNBC where he covers Facebook and social media. Needless to say, he’s a busy guy. Prior to CNBC, he reported on the tech industry for Reuters, Inc. Magazine, the International Business Times and the L.A. Times.

In this episode, hosts Beth Cochran and Breanne Krager welcome Sal to The SuccessLab Podcast to hear how his love of football ended up being the catalyst for his pursuit of journalism. Sal also shares how his single-minded hustle as a college student led to a job at the L.A. Times, how he learned to look out for his career the hard way and what it takes to develop trusted relationships with sources.

How did your career in journalism begin?

It all started in high school. I was trying to find a way to be close to something that I really love, which is football. I was too small to play for my high school, so I Googled the next best thing: “How do I eventually land a job at ESPN?” Each result I found said to go work for your high school newspaper, so that’s what I did.

Then, during the summer between high school and college, I drove around Houston with my dad trying to find an outlet that would let me come on as an intern. Finally, we found this weekly newspaper that catered to the Indian community in Houston and they let me be their intern.

I leveraged that internship while in college to get on the school paper that first semester. Unlike a lot of my classmates at the time, I was basically doing everything I could to land an internship every semester and write for the school paper. It might seem like I climbed the ranks quickly, but I was just going at it full steam after having fallen in love with it back in high school.

Do you have a favorite story you’ve worked on?

The one that comes to mind is when I was at Inc. Magazine. We were pitched by the folks from England who make McLaren vehicles, which are some of the most expensive luxury cars in the world. They said, “Hey, would you want to take our McLaren and drive it down from San Francisco to LA and stop at the various tech hubs around the California coast?” This was confusing to me because I only knew of one tech hub along the California coast, which was Silicon Valley. We asked if I could just drive it around the Bay Area and they agreed to that. They wanted to really cater to the tech billionaires in the Bay Area. Getting to drive that car and tell that story was a ton of fun.

How do you make genuine, impactful connections with sources?

The biggest thing is establishing trust and your credibility. If you reach out to people, a good portion of them will Google you, find your author page and take a look at your previous work. If your previous work is accurate and holds up to what they know to be true, then perhaps they’ll be more trusting of you. If it doesn’t, why would they talk to you? You never know why someone might talk to you. I simply reach out to as many folks as respectfully, and transparently, as I can.

What’s a challenge you’ve had to overcome?

When I left the L.A. Times, I had been there for two and a half years. At the two-year mark, they switched up the editors and I was assigned a new one. He and I didn’t get along, and eventually they decided it would be best if they let me go. So for me, that was a huge obstacle.

The lesson I took away was that no one’s going to care about my career more than I am. I’m the one who needs to ensure I’m growing as a professional and looking out for myself. I landed at the International Business Times and I made the most of it. I think it showed my peers in the tech reporting industry that the L.A. Times made a mistake. I feel like nowadays I’m doing the exact job that that particular editor didn’t think I could do.

What’s been one of the most challenging aspects of covering Facebook?

One of the biggest challenges I am working on are the relationships that come with beat reporting. There are some relationships that are easier to maintain. Say you acquire a source who used to work at the company and left for whatever reason. That’s a pretty easy relationship to maintain because they probably left because they were either wronged or were just no longer a fit. But the relationship with the company itself is very tricky because the whole purpose of their communications teams is to ensure that whatever gets written about them is as positive as possible. If you’re doing a good job as a beat reporter, that simply won’t be the case because you’re the person whose job is to hold them accountable.

What advice would you give to up-and-coming journalists?

I would stress the importance of being organized, and maintaining and cultivating relationships.  So much of your value as a journalist is who you know and whether you can reach them. I try to make my contacts as searchable as possible so that if something breaks, I can quickly pull up all the folks that I know relevant to that particular subject. Then I hit them up as soon as possible.

Are you a coffee drinker? I am.

What’s one business tool you’re geeking out over right now? I am on LinkedIn all day, every day.

What is your favorite social media network? For professional, it would be LinkedIn. For personal, I’d say either Instagram or Reddit, but because Reddit’s a little weirder, I’m going to go with Reddit.

What’s one book you’d recommend? I really recommend Bad Blood, which is the story about how Theranos fell. It’s non-fiction based on real reporting. It was so good, I loved it.

Who is one person you’d like to make a connection with? Whoever can help me break the next story I’m working on.

What’s your favorite icebreaker when introducing yourself to someone? I can’t say I use it often, but I have asked someone what their favorite dinosaur was.

How many hours of sleep do you get on average? I need a minimum of five hours to function. And I really can’t do more than nine because then I just get bored of sleeping.

How can people connect with you: I’m very reachable on Twitter. My handle is @Sal19.