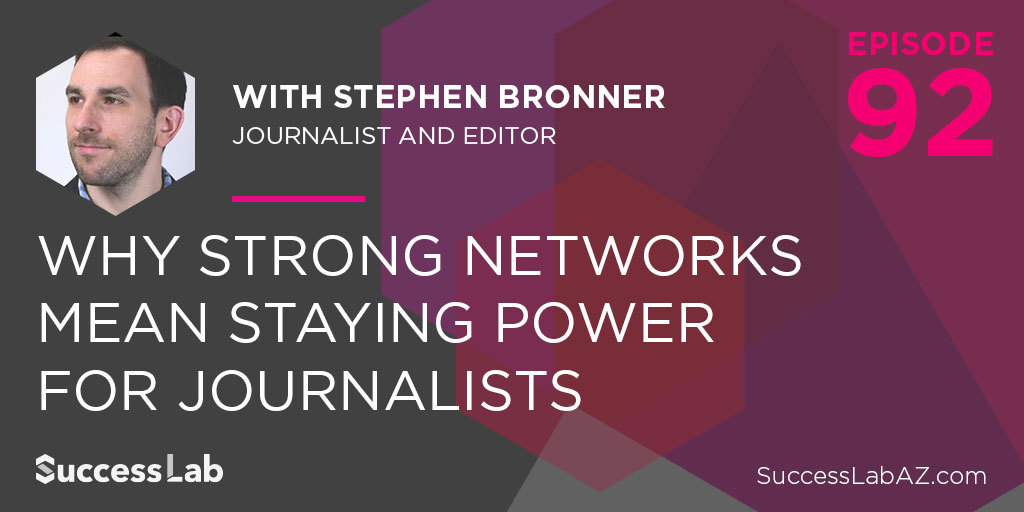 With the media landscape changing at a rapid clip, journalists need to adjust and adapt to evolve with their profession. The rise of digital, as well as video and podcasts, also means today’s journalists need to be tech savvy and rely on strong connections within their networks.

Take Stephen Bronner, who has been a journalist and editor for more than a decade, including more than five years as the editor at Entrepreneur.com. He has worked intimately with CEOs, founders, business leaders and experts to share their stories on Entrepreneur Media’s website, which brings in nearly eight million unique visitors every month.

In this episode of The SuccessLab Podcast, Stephen pulls back the curtain on life as a journalist, including working his way from community news to eventually building Entrepreneur’s outside contributor network. He shares insights on building relationships with sources, identifying stories that will resonate and advice for journalists looking to advance their careers.

Would you tell us about your career journey so far in journalism?

It’s been insane to say the least. I graduated from journalism graduate school in 2008, at the height of the recession. They told us, “All newspapers are going to go away and everybody’s going to go digital. Good luck out there.” I didn’t find a job for about five months, and ended up taking a job for $23,000 working at a little community newspaper on Long Island, New York. I did that for six months, and then I was able to go back to a place where I had been freelancing, which is a free daily newspaper in New York called AM New York. I became one of their editors, doing front-of-the-book niche and world news. Then my old boss at the community newspaper called and said, “Hey, I’ve been working at this company called Patch. Do you want to join me?” I ended up covering the same community again, and I did that for three years.

Later I ended up at Entrepreneur as their contributors editor and I was tasked with building their outside contributor network – CEOs, media executives, business professionals and the like – to generate story ideas and write columns for the site. When I started out there were probably around 20 writers, and then we ended up having hundreds and hundreds of contributors. Then I was promoted to the news desk at Entrepreneur and did that for about three years. And now I am looking for my next opportunity, as they say. It’s been tumultuous.

Are there any favorite stories you’ve covered?

Over the past few years I’ve had the chance to cover the packaged food industry, which is kind of at a weird place right now, because milk is no longer milk, meat is no longer meat. Things are changing. There’s been a lot more science to push things in the right direction environmentally wise, and taste-wise. I would say packaged foods have gotten significantly better –– better for you, better tasting, better for the planet. That’s where most of my attention has been going.

In terms of the stories in that vein, I got the chance to interview Ethan Brown of Beyond Meat, which was one of the first Q&As that I did in this area. He was very inspiring to talk with. Then one of the last stories that I did at Entrepreneur was about a company called Perfect Day. These are two guys who have invented a flora-based milk protein. The thrust of it is that they’ve created, through genetic modification, the exact same structures that are in milk dairy. They want to basically be the provider of this dairy alternative to the entire food industry.

What’s been one of the best things that you’ve done to propel your career forward?

It really comes down to luck. I don’t mean that in randomness, but putting yourself in the best position to move your career forward. I was very fortunate at Entrepreneur to have a good supporter in Ray Hennessey, the editorial director who hired me. He laid out the vision and the goals that he wanted me to accomplish. As he had a vision to expand Entrepreneur, he included me in that, and that’s how I ended up at the news desk.

What is one of the best ways you’ve made impactful connections for your career?

That’s a tough one. I don’t network, per se, which is probably insane for me to say. You develop friendships with people that you work with, and hopefully you stay in contact even if it’s just through LinkedIn, keeping up on their careers as they move forward and then keeping those connections warm as you make your moves. Grad school was a good place for that. Patch was a great place for that, because Patch employed so many people and they’re everywhere now.

Is there anyone who has shaped your journey significantly?

The editor at my first job, Paul Shapiro. He’s doing content marketing now, but he was a good supporter of me because he hooked me up with Patch and that helped my career a lot. And then, as I mentioned, Ray Hennessey was an early supporter of my skills and my ability while I was at Entrepreneur. He was just a good person to be around.

How have you seen journalism change over the last decade?

I think what’s been the biggest change is the internet has democratized journalism in good and bad ways. Not everybody reads the same news anymore, so not everybody subscribes to the same facts anymore. You could have more voices, which is great, but more voices also bring pitfalls.

In terms of actual changes, I would say video is probably the biggest. Online video is a trend that just keeps popping up. When I was in grad school, it wasn’t on the radar. We were still being trained to do slideshows. Radio is still kind of a thing, and podcasts have roared back to life, which is just radio segments really. I imagine those two – video and podcasts – will have some staying power, as well as good writing, of course.

How do you spot trends and identify stories that will resonate?

I can’t actually say I know what resonates, but I understood Entrepreneur’s audience pretty well. They love stories that will unlock the secrets to them becoming millionaires. In terms of covering a beat, it’s really just talking to people constantly and seeing what they’re excited about, and usually that will point you toward trends. If you hear the same thing from three different people, then we in the media industry regard that as a trend. Twitter’s also a good source because it can point you to what will be talked about in the future as well.

How do you go about making genuine impactful connections with your sources?

The number one is to be prepared. Learn about their businesses. See what they’ve written. See what they’re excited about. Then just have a conversation with them. At least in the niche that I worked in, people really wanted to talk about what they were doing. They were excited and loved the opportunity to explain it to people as well. It also helps creating a backlog of your work and having them see it. If you do your job well, then they’ll be more willing to talk to you because they can see that you have good intentions and that you want to tell their story.

What is your advice for fellow journalists looking to advance their careers?

Go deep on something that you’re interested in. If you want to cover a beat, then read up on it, talk to people about it and get the word out that that’s what you’re interested in. Most people I’ve encountered will have no problem speaking to you. If it’s a journalist in the field, say, “I really appreciate your work. I’d love to take you out for coffee.” Journalists love free coffee.

Are you a coffee drinker? Absolutely.

What’s one business tool you’re geeking out over right now? I really love Feedly, which is an aggregator that allows me to have 30 different news sources so I can go through the headlines relatively quickly.

What is your favorite social media network? Twitter. LinkedIn is very good for making connections and getting your resume out there, but I have not figured out how to use it masterfully, even though I probably should.

What’s one book you’d pass along to an entrepreneur or fellow journalist? The Omnivore’s Dilemma by Michael Pollan. That’s what kicked off my interest in food. I like The 4-Hour Work Week by Tim Ferriss. That was influential on my work ethic, in that you don’t need to go absolutely nuts all the time. You can create systems that involve less of you and have things become more automated. I don’t know how up-to-date it is, but it’s just a very inspirational book, and one that touched me at a good point in my life.

Who is one person you’d like to make a connection with, either past or present? I’m going to repeat another answer, but Michael Pollan is somebody that I look up to. I think he’s one of the best journalists around today. I’m in the middle of his book on psychedelics now and it’s so fascinating, and just the way that he tells stories and gets really deep into whatever he’s covering is really inspiring.

What’s your favorite ice breaker when you’re introducing yourself to someone new? Probably pointing to something interesting that’s going on in the industry and then providing a link.

How many hours of sleep do you get each night, on average? Six to eight.

If you could live anywhere, where would it be? Tokyo

What is your favorite game right now? I’ve been playing an old Castlevania game at the moment. I’m a huge fan of the Metal Gear Solid series. I might be speaking another language to the listeners right now, but the guy who made that is named Hideo Kojima, and he has a new game called Death Stranding coming out later this year, which looks weird as hell and I’m so excited. I’m literally counting down the days until it comes out.

How can people connect with you? Twitter and LinkedIn are good for that.