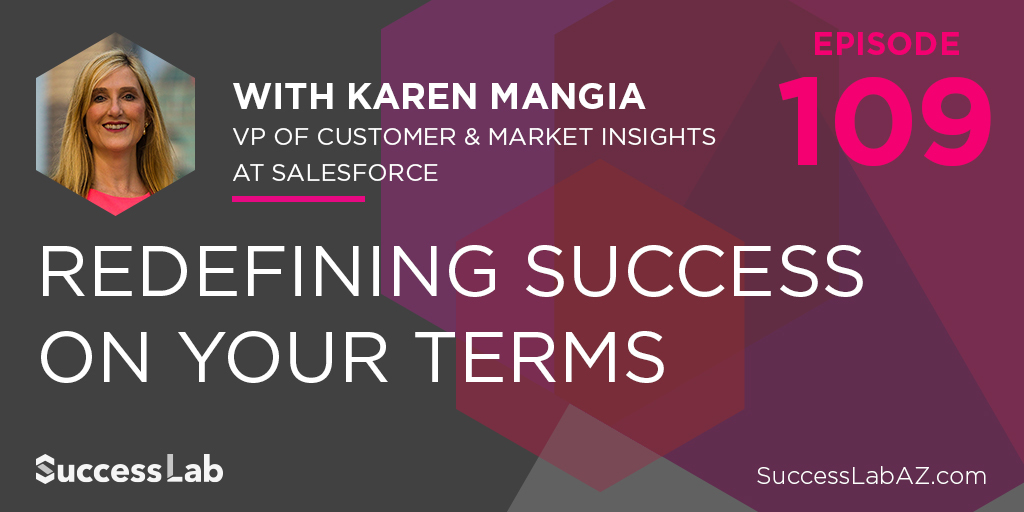 When was the last time you paused, reflected on what was going on in your life, and took a hard look at how it was affecting your happiness, health and overall success? Has it been awhile? More than likely, the answer is “yes.”

Often we rush from one task, milestone or accomplishment to the next, in constant pursuit of what we think we need to make us happy, successful and fulfilled. In other words, we’re always looking for more and it’s exhausting.

For Karen Mangia, VP of Customer & Market Insights at Salesforce, this was her reality until a health issue forced her to press pause. But as they say, it’s often life’s most challenging situations that present the best gifts. Through this journey, Karen learned that success, happiness and fulfillment wasn’t about more. In fact, it was just the opposite –– a topic she explores in her book, “Success With Less”.

In this episode, we talk to Karen about how the idea of “pause, ponder, prioritize” came about, how to peacefully coexist with old habits, and how to identify when you’re at a crossroads and what to do about it.

What led you to write “Success With Less”?

I think back to those early days when my mom would do this chore chart. It would be a list every day of the things that you were supposed to do and the behaviors you were supposed to display. If I did it, I would get one of those gold stars. I loved being able to see the stars across the board, like these little moments of achievement. I took that gold star mentality forward in life. Keep saying yes, keep performing, and keep amassing those gold stars. It was a formula that worked incredibly well early in my career. I earned several promotions and got some recognition and rewards that created more opportunities.

The challenge was that the further you go in your career and life, you have to be more thoughtful about what you’re saying yes to and whether it’s serving you and moving closer to your goals. All those gold stars eventually added up to a really major setback in my life and I started discovering that “Success With Less” formula. How I defined success changed radically. Success was getting healthy enough again to be able to enjoy my life and that was a very different definition than getting gold stars, and that was okay.

Being a type-A personality, how did you teach yourself to pause more frequently?

In some ways, the pause was forced on me because I was conscious that I really did have limited time and energy. What I found during that time was that having a success mindset and an outcome in mind helped me start saying “no” to things that might drain my energy and not get me closer to my goal. What I started to discover when I was saying “no” on my own terms or pausing from endless activity was the pauses that we choose feel really different than the ones that are forced on us. What I started finding was when I could choose these moments to pause because they would help me refresh or reset, it felt a little more empowering.

How do keep from returning to old habits and thought patterns that set you back?

It is really difficult to change our routines and boundaries and then stick with them because that takes energy. We don’t always have all the energy that we need to endlessly keep everything in perfect balance. What’s important is how do you reset when you find that happening? I’ll never forget what my friend once said—that it is okay to look behind you and acknowledge that that person with those habits is still there and it’s always going to be there. The difference is you can see that person from a distance and peacefully coexist which means you now have permission to make a different choice. Having a little bit of saving grace that you’re still human and you’re gonna make mistakes will go a long way.

Are there one or two people along your journey who have really transformed the trajectory of your career?

There are a couple who come to mind. I had hit a point where I was looking for a role outside of sales and I had flown to another city for a job interview in my same company. When I got to the city and in my rental car, the interviewer called me and canceled the interview. I’m like, what do I do now? I found this mentor and she said, “Drive to my office, I’ll think of a plan.” When I got there, she said, “Great news. You and our Chief Operating Officer graduated from the same university. You’ll call him, tell him you’re in town and that you would love to meet him because he went to the same university.” I thought this sounded like a horrible plan, but I was desperate. I called, met up with him, and ultimately ended up working for him. This sent me on a completely different career path and really brought me to where I am now. Another really formative person that stands out for me is an executive coach I had named Diane. I dedicated the Success with Less book to her because it never would have happened without her coaching and encouragement.

What are some of the best ways you intentionally make impactful connections to grow yourself?

When I think about growth, I think about what I want to learn and experience next. Sometimes those things come about organically and sometimes I’ll find it when I’m listening to somebody else describe a hobby or something they do in their role. I get really excited and I think I would love to try that. That’s always been something that’s guided my career and my life, where I’ve sampled different hobbies and experiences. I’ve found that that has led me on some really interesting paths.

What would you recommend to somebody who maybe feels like they’re at a crossroads but don’t know what direction to go?

I refer to that as the general malaise—that feeling that nothing is getting you super excited and you don’t really feel a clear sense of where to go next. In those times, I try to think about any small thing that might be enjoyable or what is it that you did when you were five that you absolutely loved? Do just a little something that sparks that nostalgic joy. Be really observant about if anything lights you up. Sometimes we put a lot of pressure on ourselves to figure it out in an instant, but it’s okay to live in that spot for a while. Another tool that has helped me is going with the people who I don’t know that invite me to connect and have a conversation. I will go through a period where I just say “yes.” I don’t know where I’m headed at the moment so this “yes” might be something that ignites excitement or opens up a path to a new opportunity.

Are you a coffee drinker? Yes
What is one business tool you’re geeking out over right now? I hate to admit it, and it’s so cliche, but Zoom.
What is your favorite piece of technology? My mobile phone
What’s one book you’d pass along to someone who may be looking for new inspiration? Lifescale by Brian Solis. He has some fantastic tools about how to shut out distractions and work in 90 minute sprints.
Who is one person you’d like to make a connection with? Brené Brown. I find what she has to say to be incredibly practical, soulful and challenging.
What is one of your favorite icebreakers? Two things that I like to ask people about are what are you excited about right now and what was their first job?
How many hours of sleep do you get each night on average? I make a concentrated effort to get eight hours of sleep every night.