How Your Strongest Connections May Be Those in Your Peripherals 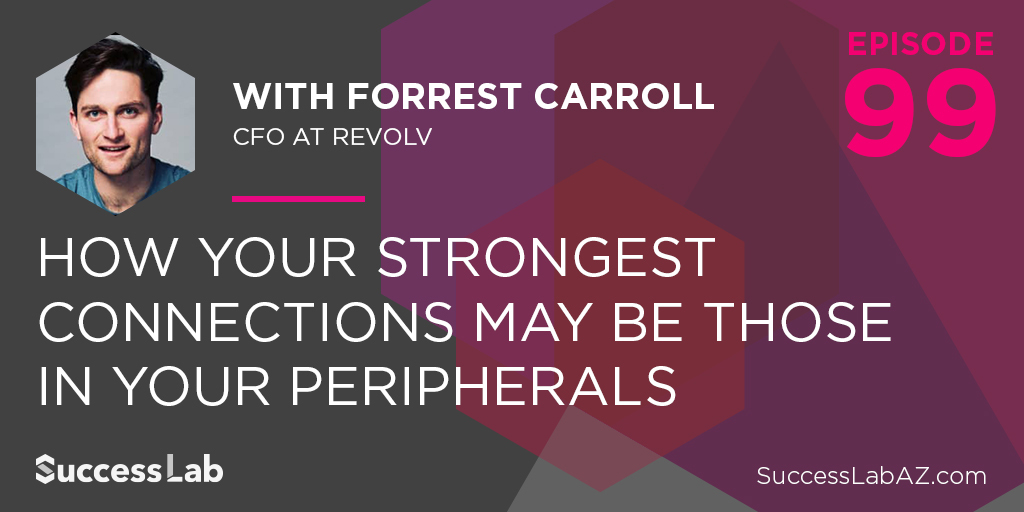 When we think of the circular economy and sustainability, many of the organizations in this burgeoning space –– and moreover what they do –– may seem nuanced to the general population. However, in reality, people have been implementing these practices for generations. At its core, the circular economy is a framework for an economy that is restorative and regenerative by design –– a concept that has been around since perhaps the beginning of humankind.

Forrest Carroll, the CFO of Revolv (soon to undergo rebranding as Muuse), knows this firsthand having grown up on a farm in Maryland where the concepts of land stewardship, gardening, composting and fixing what was broken reigned supreme. Forrest directly attributes his upbringing to his foray into the renewable energy industry, which eventually led him to Muuse. On a mission to solve the ocean plastic problem, Muuse was created to empower food and beverage, and consumer packaged goods companies to shift away from the single-use products and instead adopt their reusable foodware products and deposit system.

In this episode of The Success Lab Podcast, Forrest breaks down how Revolv (soon to be Muuse) works, the inspiration behind the organization, how to build a network of allies, and the importance of cultivating relationships with, who he calls, consequential strangers.

What does Revolv do?

So, Revolv –– actually, I guess this is as good a place as any to announce our rebranding as Muuse1. Anyway, Muuse is a software platform for reusable foodware. We’re mainly working on coffee cups and to-go food boxes right now. In its simplest form, we have a coffee cup with an RFID chip in it that you check out through a digital deposit at any of the cafes in our network. When you’re done with your coffee, you drop it off at any of those participating cafes or into one of our smart return stations, which reads the chip and sends a signal to our system to reimburse your deposit immediately. There’s a need for this right now because the recycling systems we work with currently are seemingly ineffective and, in many instances, like with bioplastics, they aren’t performing as they were intended to perform. So businesses and consumers are turning to this rapidly growing class of reusable goods.

1Editor’s note: We will refer to Revolv as Muuse throughout the remainder of this blog post

What led you to Muuse?

The journey really starts on the farm where I grew up. I grew up in Maryland where there’s this idea of land stewardship and gardening, which is the ultimate example of the circular economy and implementing sustainable practices in everyday life. On the farm, you’re constantly fixing things instead of throwing them out. Take composting, for example. It’s using existing natural systems to repurpose organic matter. Further down the line, this led me to work in the renewable energy space where I helped design and build solar energy products across the U.S., which then led me to Muuse. Part of how I got there was due to my old boss, who I worked with at my last renewal energy company, inviting me to see what he was starting in Indonesia. He talked about that pilot test case in Indonesia, and that mixed with my growing love for the ocean and my new surfing addiction. So I’d say the mesh of those two things really led me to Muuse and it has been a whirlwind ever since. I haven’t looked back.

The advantage to what we’re building at Muuse, and to a lot of the things I’ve worked on in my business career, is we’re building a mission-driven organization. We really don’t have to spend a lot of time defending the sustainability benefits of what we’re working on. People get it. We know what we’re going to offset or that we’re going to replace that single-use coffee cup you just bought with a reusable one that never ends up in landfills or the ocean. Finding people whose mission aligns with that is really valuable because they become part of your network of allies.

Eventually, you build a large enough network and they are connected to people who you really want to talk to at the business table. And the other benefit we have is that, to their credit, a lot of these large corporations –– I’ll use Starbucks as an example –– are trying to figure out solutions to the enormous amount of waste that they’re creating right now. They are consumer-facing, so they’re getting a lot of pushback. They’re in the media. It’s to our benefit that we have people who are trying to work on this in these large corporate roles, which are important allies because they’re the ones who know what a good solution is.

What’s one of the biggest challenges you’ve had to overcome at Muuse?

Patience is one of them. When you move from a big company to a lean startup model and everything is going really fast, you just assume everything will take off immediately, right? But that’s not the reality. You have to build all of these systems you never had to think of before. And ultimately, you’re still working with these large, multinational companies that think you have these systems in place, so they push back on contract terms and methodology and expect you to have a crack legal team that can help reach a compromise on a contract term, et cetera.

Part of the way I’ve overcome this is having worked to embrace this process of discovery and reflect and appreciate the amount of knowledge we have accumulated as an organization through the testing and piloting programs we’ve conducted in six different global markets, and from talking to untold number of coffee drinkers or baristas or a cafe managers. When you’re working in such a fast-paced organization, there is a lot to build beyond just that reusable cup.

Are there one or two impactful connections that have significantly shaped your journey?

I’ve got to talk about Brian Riley, who’s the true founder of this company I’m working on and is someone I first met working at NRG. He immediately occupied this role as a mentor and a boss, which in and of itself is very rare, especially in a hierarchical work environment. But what is even rarer is to find a mentor who treats you like an equal from the onset. That enabled me to grow in a way I hadn’t been able to grow before and is one of the reasons I agreed to go see the operation he was building in Indonesia and why I’m where I’m at now.

Another source of impactful connections comes from this idea of consequential strangers, which are most of the people you meet outside of your family and friends –– the people on the peripheral who lie in that social territory between strangers and intimates. If you pay attention to those consequential strangers, the sort of collective power of them to help you move ideas forward or to give you advice on very specific parts of your business, your personal life or your professional development. Put them together, and they are a very powerful and impactful connection. I’ve run into a lot of those consequential strangers over the last year working at Muuse.

I think a part of it is meeting consequential strangers and being open to diving deeper into that informal network all of us have. Asking people for help and asking people for explicit advice or expertise –– and then paying attention to what they have to say –– is really important. It might not be as relevant to the exact question you’re asking but helps peel away this veil of what that person’s really good at or what they understand. Being flexible and opportunistic allows you to dive in with that person perhaps on something that you didn’t previously anticipate.

Coffee drinker, yes or no? No.
One business tool you’re geeking out over right now? Fusion 360. It’s a 3D modeling software.
Favorite piece of technology? Oh, well (Muuse’s) ultra-high-frequency RFID chip, obviously.
What’s one book you’d pass along to a fellow entrepreneur? The Lean Startup by Eric Ries.
One person you’d like to make a connection with? Oh boy, that’s a good one. I want to make a connection with John John Florence. He’s a famous surfer and he’s working on ocean solutions –– and I think he should become an ambassador of Muuse.
What’s your favorite ice breaker? I like getting away from the chit chat and immediately going for questions that get to the heart. Here’s one: what’s the most important lesson your father ever taught you?
How many hours of sleep do you get each night, on average? Two. No, I’m just kidding. It just swings so much, it’s hard to come up with an average. I try my best to get eight. I really need my sleep.
How can people connect with you? We have a pretty significant online and social media presence, but we are still transitioning from the name Revolv. However, I can be reached at forrest@revolv.io.