Venturing Boldly into the Emerging World of Femtech 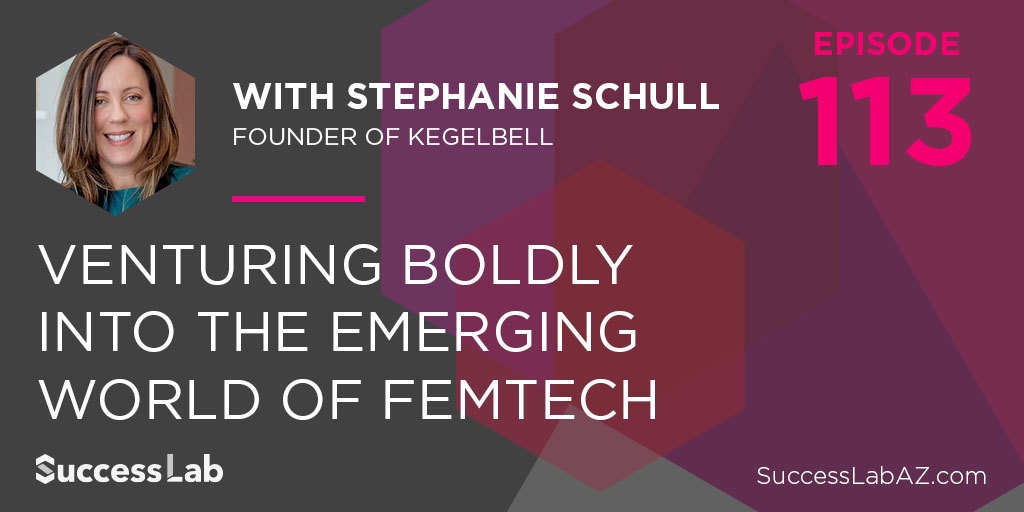 When a routine –– and very common –– medical procedure went awry, it prompted a major career and life shift for Stephanie Schull. Stephanie’s mother underwent a procedure that hundreds of thousands of women have undergone, and like many that have –– which they would soon come to learn –– her outcome was unsuccessful, leaving her in pain for the rest of her life.

Refusing to accept this fate, Stephanie left her career as a philosophy professor in pursuit of a better solution for the many women who—like her mother—experience pelvic floor issues.

Today, Stephanie is the founder and inventor of Kegelbell, the only FDA-registered external vaginal weight that provides a natural way to get stronger pelvic floor muscles. Through Kegelbell, she is aiming to remove stigmas around women’s health and bring a voice to pelvic floor issues that have been kept quiet far too long.

In this episode, we learn about Stephanie’s sweeping move from academia to the business world, the challenges she faced in producing solutions for what is still mostly a taboo subject, and the creative ways she’s been able to run her company with a lean team.

What led you to create what is today known as Kegelbell?
My mother got a pelvic mesh surgery that didn’t work well for her and she will be in pain for the rest of her life. When I learned about this, I was shocked to know that she had problems with her pelvic floor for all these decades. And I was shocked that there was a surgery with such a questionable success. My response to the problem was to research it. That’s when I realized that most women have problems with their pelvic floor and as of five or so years ago, people weren’t talking about it. The solutions, as a result, were flawed because there wasn’t enough conversation. As I dug, I saw that there was a good option, it was just not being utilized. When I talked to people about it and discovered they weren’t going to make it right, that’s where I decided I had to get involved, so I quit academia and started Kegelbell.

What’s been one of the biggest challenges you’ve had to overcome in building Kegelbell?
The first challenge was that the subject of pelvic floor issues was taboo. My mother had the problem for decades and didn’t tell us about it. When I started wanting to fundraise, I heard a lot of “no, that’s not really a problem” and “it’s too expensive to educate people about it.” Something else that I got pushed back on was the solution I was proposing to fix, treat and prevent weakened pelvic muscles. A lot of investors were saying, “you need to provide an ongoing band-aid solution that keeps the customer on the hook.” I ran into some pretty systemic problems right out the gate.

What was one of your darkest moments, and how did you emerge from it?
The darkest moment is an ongoing, everyday concern. With a physical product, I’m looking down the barrel of bank account and cash flow issues every day. Looking at cash flow problems is uncomfortable and it’s like I’m flying too close to the sun all the time. As I get bigger, it’s the same problem, just with larger numbers. This isn’t going to go away. I have to adjust to this reality, which is a bit different than the things I’ve been used to up until this point.

What keeps you going?
Listening to podcasts like these so you don’t feel alone. It’s important to hear from other people with multi-billion dollar companies and hearing them say it’s never comfortable and that they’re always close to the edge. I recently heard the founders of Lyft talk about how some of the scary moments just don’t go away, and I’ve been telling myself that. Finding comfort in hearing from others is why I wanted to share my experience in hopes it helps someone else.

What has been one of the best things you’ve done for the business to grow it?
Not giving up. If you stick with it, it grows a little bit incrementally and then that growth becomes exponential. It’s been hard because I haven’t paid myself this whole time. We have very few paid people, but that helps us grow. Also, finding the right people to have around. In this case, it’s people willing to work as a volunteer for free or at a reduced rate because they really love the mission. I need their energy and talents for this to work, so bringing on more people, even though I didn’t have the money to, really mattered.

What does the future look like for Kegelbell?
More products. I have so many products on the shelf that I want to launch. Everyone has warned me that it’s too soon and to wait until Kegelbell is strong enough. But, you have to innovate and offer more. The investors are right in that having just one product isn’t sufficient. Once you’ve acquired the customer at that cost, you need more than one product. So, rather than give them a solution that isn’t permanent, I’m just going to give them more products that do different things and solve different problems. I hope to be known as a company that solves problems in a novel way.

Are there one or two impactful connections along your journey that made a big impact?
I think a big deal for me was getting connected to SEED SPOT, which is an incubator/accelerator for businesses with a social impact. I went from having no business network to immediately being connected to a world where people were helpful.

One of my favorite memories of another impactful connection stemmed from an architecture trip to LA I went on with a friend. During one of her meetings, I went to a pot pie place. There was a nice gentleman there behind the cash register. He came by and asked me how the pot pie was. Eventually, I began to tell him all about Kegelbell. He started asking questions and then he offered some advice. I found this guy to be really resourceful and that he had some useful information. He said he’d be happy to look at my website and give me some feedback. Later, I found out that this guy was not the cashier at a pot pie place. He was a former CMO at Pixar, Disney, Nestle, and was the current CMO at Sears. He’s also one of the Harvard Business School Angel Association and has been a mentor and one of my advisors since that day.

What’s one piece of advice you would give to fellow entrepreneurs looking to make impactful connections?
Hopefully that story of the pot pie place is a lesson that you never know where a connection will be made. I’d also say that too many people are hesitant and take the safe route. Be a little more risky, because bold gestures often end up resonating.

Coffee drinker, yes or no? Yes.
One business tool you’re geeking out over right now? Gorgias
Favorite piece of technology? The cell phone
What’s one book you’d pass along to a fellow entrepreneur? The 4-Hour Workweek by Tim Ferriss
One person you’d like to make a connection with? Tim Ferriss or Sigmund Freud
What’s your favorite ice breaker when introducing yourself to someone (either online or off)? If someone says you look familiar, I say, do you watch a lot of porn? And then they’re like, “Oh wait…no. Do you?” I say I don’t but that I was just looking for a conversation starter. It slays every time, and if someone runs away scared, you probably didn’t want to hang out with them anyway.
How many hours of sleep do you get each night, on average? At least eight hours, sometimes seven.
How can people connect with you or Kegelbell? You pretty much can find us on any platform—TikTok, Twitter, Facebook, Instagram. You can also email hello@kegelbell.com.