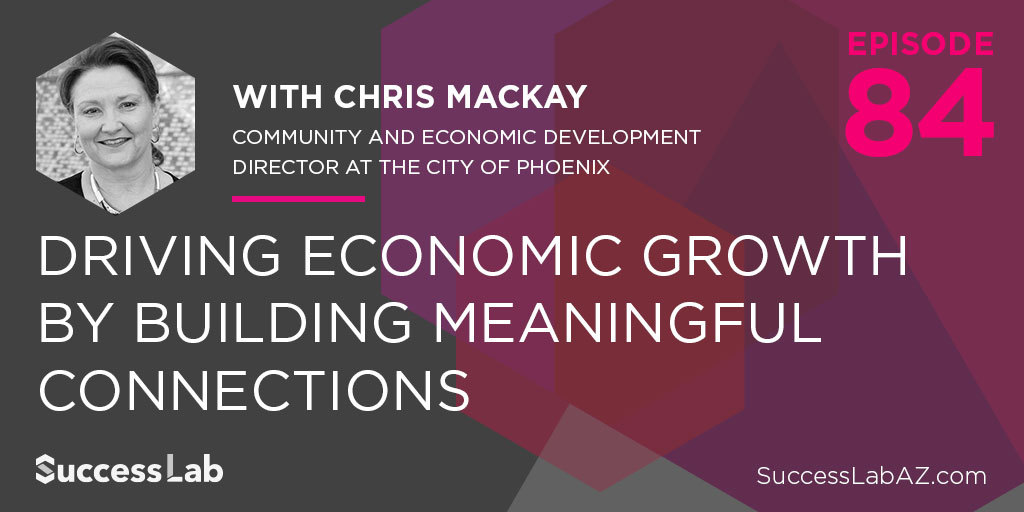 Have you ever looked around a city in awe of the caliber of companies it boasts and wondered how it all came to be? In the case of the bustling Phoenix metro area, one person who deserves enormous credit is Chris Mackay, the City of Phoenix’s Community and Economic Development Director.

Chris leads the city’s business development team in attracting businesses to Phoenix and expanding the 16,000 that are already established here. She also has a hand in various small business and entrepreneurial efforts, downtown development and international, retail and workforce development. During the last few years, she has located hundreds of companies to Phoenix, adding a whopping 22,000 jobs to the local economy.

All the while, Chris has had a front row seat to the dramatic shift Phoenix has experienced over the last several decades. Once a city driven by real estate and construction, the community rarred back to life after the Great Recession with cybersecurity, software technologies, advanced manufacturing and aerospace leading the charge.

In this interview, Chris shares how she makes impactful connections with leaders to inspire them to plant their roots in Phoenix, how she’s working to keep talent in Arizona and why there is nothing more important than one-to-one connections in the business world.

Can you tell us about your journey and what led you to your current role?

My whole professional career, for the most part, has been in commercial real estate or economic development in Metro Phoenix. I worked for a commercial real estate brokerage firm in the ’90s and we would go out and hunt for new companies to come back to Metro Phoenix. I always found myself wondering about the companies that we worked with. Did they like the space? Did the employees that moved in find good schools for their kids? Was it everything we told them it would be?

Now, instead of moving from transaction to transaction, I get to be part of a team that builds a city. Not many people get to say that long after they’re gone, the buildings they built, the companies they helped, and the jobs that they helped create will still be here.

What do you see becoming one of our next economic drivers?

Real estate was always the driver, and that’s why Arizona has always been such a cyclical market. As real estate goes, so goes the rest of the economy. If home building isn’t going then the entire economy tanks. But that’s not the case anymore.

Now it’s about emerging technologies and companies that have high wages that are bringing educated jobs for all of our citizens, not just for one sector. Not that construction jobs aren’t great jobs – they are. We just can’t be reliant on that growth. It has to be on a good diversification of industry and not just construction and sales tax.

Do you do a lot of one-to-one relationship building?

In economic development, there is nothing more important than that one-to one-connection. People think that what we do is an immediate gratification but it can be a year’s long relationship that we create. And so that one-to-one connection, the one thing that speaks to that individual decision maker, is critically important.

Can you share an example of a way you really won someone over and got them to locate in Phoenix?

I was working with the CEO of a company and he happened to mention on the phone that his daughter was going to look at Arizona State University and he would be here for a meeting to see the school with his daughter. I called my contact at ASU, logged online, found his picture on his LinkedIn and sent it to my colleague at Arizona State University. She found him in a sea of thousands of parents and freshmen, walked up to him, put her arm around his daughter and said, “Don’t worry. We’ll take good care of her.” That company eventually landed in midtown Phoenix and the CEO told me that experience was his turning point to work with a city that cared that much about his family.

What other tips do you have for building meaningful relationships with people?

I think the most important thing to remember is to focus on the person that you’re talking to. Don’t look past that person for the next person that you should be talking to. You’re making a connection to that person and you have no idea where that relationship is going to lead to in the future. And always do your best to follow through on everything that you told someone you would do.

What’s one piece of advice that you would give to Valley entrepreneurs who are looking to make impactful connections here in the community?

For the most part, everyone of us here is from someplace else so we have the kindest entrepreneurial community across the country. If you’ve got an issue or a problem, people are happy to help. They’ll grab a beer with you and talk it through or they’ll have pizza with you and help with the ideas. People are perfectly happy to take a meeting and tell you, “Hey, this is what I found.”

I would say if you need to make connections with the entrepreneurial community, don’t forget your economic development team because we know most of them. We’ve had connections or meetings or conversations with most of them, or at least we know where to start to make the connection.

What do you foresee on the horizon for Phoenix?