How Transformation, Innovation and Vision Led Coplex to Success 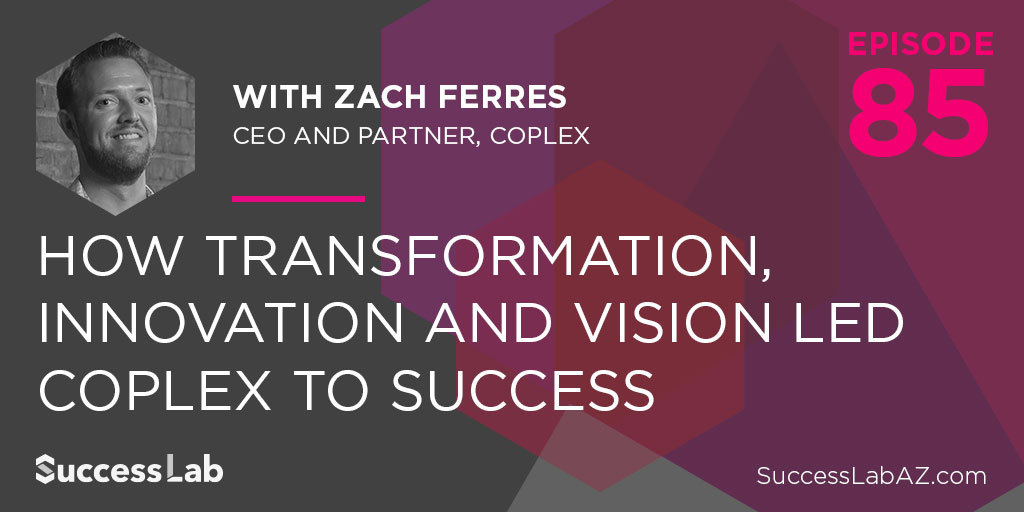 Few individuals take a linear path to becoming an entrepreneur. Rather, it’s often the culmination of their passions and experiences that lead them to identify problems and harness the fuel that drives them to work toward solving those problems.

Take Coplex CEO Zach Ferres for example Today Zach is a pillar of the Valley’s entrepreneurial ecosystem, but his journey actually began in northern Ohio as a kid who liked taking computers apart and putting them back together. That fascination blended with a natural inclination for entrepreneurship led him to launch various ventures in computer and car stereo repair in middle and high school. Always in tune to evolving trends and needs, Zach then forayed into website design while attending Ohio Northern University. This jump started his first official company, Bounce Host (now Bounce Fire). He grew the team to 15 and following a successful multi-year run, he sold the company to a Scottsdale, Ariz. firm and relocated to Phoenix. At that point, it wasn’t long before the opportunity to consult with, and eventually lead, Coplex came about.

In this interview, Zach discusses his transition to Coplex, his early days as a CEO restructuring the team and the critical people who helped shape him along the way. He also shares painful pivots he’s made, maxing out his personal credit cards and the importance of reimagining new business models.

What were the early days like when you came in as CEO of Coplex?

It was total chaos. It was a fun time, though. The company at the time was a team of about 30 full-time team members in Hollywood. I was living in Phoenix, so I was spending a lot of time commuting. When I first took it over, the company was called Ciplex  (we ended up doing a rebrand in 2012) and it had been continuously ranked one of the top web design companies in the country. We’d get dozens of inbound leads and phone calls every day from people all over the country needing website work.

I think at one point in time, we had 350 active open projects and that’s about when I started taking things over. We realized there would be a couple of years of really grueling work ahead of us because the company grew so fast that it didn’t really have the capabilities to deliver on everything on time and within budget. The first 18 months was a lot of clean up work to get those projects done.

Then we reconfigured, restructured the team and ended up bringing on a couple of my former team members in the Phoenix satellite office at the time. We still did a lot of web design work, and fortunately, we had a few really incredible corporate clients that were working with us on innovation projects. That was part of the core DNA that’s still around Coplex today.

What was your experience transitioning Coplex from one of the top web design companies to now a venture accelerator?

We had, probably in 2013, this first inkling of, “I wonder how it would work for us to actually get an equity component to the deals that we do?” We toyed around with it from 2013 to 2016. I ended up buying the company from the founders in 2016, so I had to go out and raise some money to buy out the partners, and then it was really at that point when we decided to focus 100% of our energy and effort on helping these seasoned industry experts start tech companies. So we pressed play on that in 2016 and started actively divesting from the old part of our business model. At that time, we had maybe 10% to 20% of our work was with venture-backable startup companies meeting the criteria of what we look at today, so we had to walk away from somewhere between 80% and 90% of our revenue.

Then we actively started divesting from the old business model. We had a one year plan to essentially fully replace all of the stuff we walked away from with the new service offering, and let’s just say that ended up taking about a year and a half longer than we thought.

It was a wildly, excruciatingly painful pivot. We had to go through a small round of layoffs, we had to max out all the credit cards and we almost ran out of steam in the transition trying to crack the code on the business model that we have today. It really wasn’t until probably about a year and a half ago that the model started to prove itself and we were able to replace a lot of the revenue we walked away from.

What would you say is one of the most important lessons you’ve learned along the way?

When I started my first company, I didn’t really have a big vision. I’m an engineer, and I’m a very pragmatic thinker, and I remember in my entrepreneurship class when we learned about vision/mission/values, I was like, “Why does anyone actually care about any of this stuff? It doesn’t really make a difference.” I think in hindsight, a big learning lesson is to do that from the start because that’s where your drive comes from when things get hard. And they’re always going to get hard on this path of entrepreneurship, so that will be the one place where you can find some serenity knowing that you’re doing things for the right reason and that there’s a bigger reason why you’re doing what you’re doing.

How do you make impactful, meaningful connections with people?

Give first has always been a big one for me. When I was building my first company, I was an engineer that did not know how to network, and I forced myself to go to all these networking events. The thing that really worked was being passionately curious and talking with people to try and find ways in which I could help them with zero intention of ever getting anything back. As soon as I started doing that, doors just started opening. Give first when you’re building those connections, and they always end up coming back threefold, fivefold, tenfold.

What’s one piece of advice you would give to a fellow entrepreneur who’s just looking to grow?

Getting a coach. This whole idea of personal development is often overlooked when it comes to entrepreneurship. I think everyone has over-romanticized being an entrepreneur, and it’s really freaking hard work, and it’s not always as sexy and rewarding as it looks like on Silicon Valley sitcoms on HBO. It’s a grueling battle and at the core of all of it, you’ve got to take care of yourself. I think doing things that make sure that you have that outlet, having a coach, working on personal development, making time to run, meditate, go to the gym, whatever it might be.

I heard a really interesting quote a few weeks ago that talked about the true bottleneck to growth for an entrepreneur isn’t their business, it’s basically themselves. So any time you realize your business is stuck and you’ve hit a plateau, you first need to stop looking at the business and step out and look at yourself because there’s something that you’re doing that’s limiting the growth of your own business because maybe you’re missing something.

What’s one business tool you’re geeking out over right now? I’d probably have to say Zoom these days.

What is your favorite piece of technology? You’re going to laugh at me for this one. It’s got to be my Surface Book. I’m a Microsoft guy. I’m not an Apple guy. I love my little Surface. That and probably my car. I’m a car guy too.

What’s one book you’d pass along to a fellow entrepreneur? Outthink the Competition by Kaihan Krippendorff. It’s a book that helps people and organizations uncover world-changing ideas in white space. It’s something a lot of people don’t really spend the time to think enough about: idea generation. He provides a really cool framework for how you can think of that and go find things worth solving.

Who’s one person you’d like to make a connection with, either past or present? Abe Lincoln.

What’s your favorite ice breaker when you’re introducing yourself to someone new? I don’t really have one so I always try to find clues in the environment that I could use to open the conversation. I find something that seems out of place, or unusual, or different, and make a comment about that to open the door.

How many hours of sleep do you get each night, on average? Eight hours. That’s one thing I never really let slip is sleep.

How can people connect with you or Coplex? Coplex.com or you can drop me an email, Zach@Coplex.com.