Drive Connections by Aligning Your Mission, Values and Goals 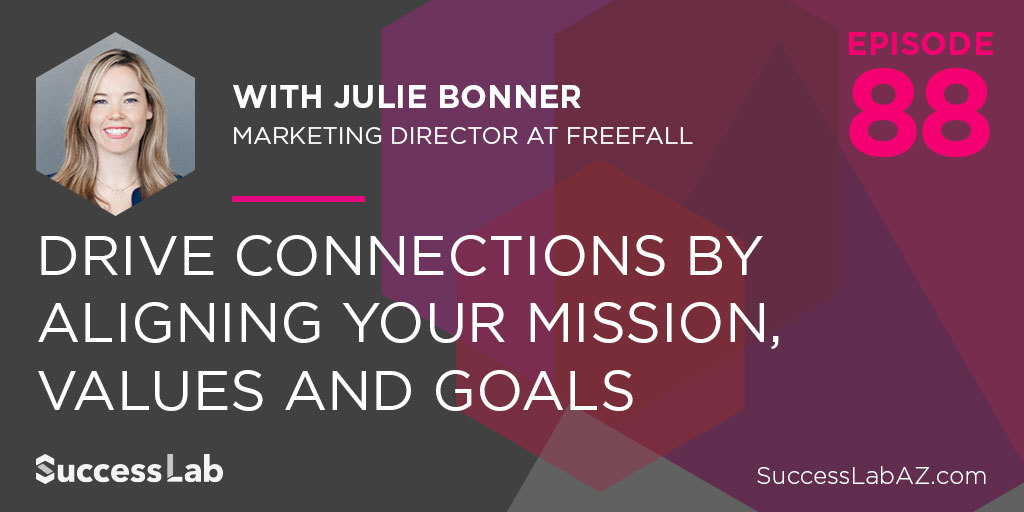 As we learned from Star Trek, space is the final frontier. So, it bodes well for Arizona that the state is home to many of the industry’s top aerospace and defense companies. Naturally, these companies are led by some of the most innovative thinkers, scientists and engineers. But go one layer beyond, and you’ll often find a stellar team of marketers working to communicate the vision and mission of the company to gain stakeholder buy in, and ultimately help the team continue to push new boundaries and boldly go where no one has gone before.

One such intrepid marketer is Julie Bonner. She is the marketing director at FreeFall Aerospace, a Tucson-based startup developing intelligent orbital and terrestrial antenna systems (or as this recent article in Wired Magazine referred to them, inflatable satellites).

In this episode of The SuccessLab Podcast, we talk to Julie about how she broke into Arizona’s thriving aerospace sector,  how impactful connections have shaped her career journey, why getting involved in industry associations is key to securing new business as a marketers and designer, and the reason to always follow-up when networking (and not take it personally if someone doesn’t respond).

How did you land at FreeFall?

It was a referral that came from Tech Launch Arizona. They were helping FreeFall in 2016 commercialize the new intelligent antenna design that had come out of the University of Arizona from Dr. Chris Walker, and knew FreeFall needed some branding, design and marketing work. Tech Launch Arizona knew me because of my past work in graphic design helping other startups with their branding and design, and I also helped out at conferences like IdeaFunding in Tucson. That’s how I met up with Doug Stetson, the president of FreeFall. We began working together on developing a new logo and materials, and really enjoyed working together.

Can you boil down what it is that FreeFall does?

FreeFall is developing new antennas. Some will be in space, as part of satellite communications  able to talk back down to antennas and receivers on the ground. And then some are ground stations. The third piece of this is actually through development and research – they’ve come up with a unique antenna design for smart cities and for the 5G era, which is coming up. What all of these things have in common is they’re all antennas, and they’re moving data.

Using your phone or downloading videos, we always want things faster and better. And going from 4G to 5G isn’t just going to be a tiny step up. Things are going to be probably about 10 times faster, and so with that, new hardware is needed. There’s a lot of development in software, but people haven’t really thought about how the hardware can help improve that sort of data rate and bandwidth that you can get, and so that’s what FreeFall is working on.

How has your career evolved over time?

Since I was little, I was always drawing and told my parents and teachers I was going to be an artist one day. I studied graphic design at Drexel University, and then worked as an in-house designer and then as in-house art director. I’ve always been entrepreneurial, so I went back to school and earned my MBA over two years at night while I was working as a full-time art director. That gave me the confidence to actually launch my own graphic design business, which was still a way for me to provide graphic design and be creative.

Now, I don’t know if everyone wants to be involved with a startup. Obviously, there’s risk involved, but I feel like there’s a lot of rewards too. Each of us at FreeFall are wearing many hats. Most of my team are engineers, so I’m a little different in that I’m coming from a creative background. I love my position, and I love helping them share what we’re working on and letting the audience and our potential clients understand what we’re doing and building those relationships.

Working with engineers, have you had to adapt your communication style?

Yes. Engineers are so smart, detail-oriented and think very sequentially. Sometimes, when we’re trying to share a marketing message, we need to step back a little bit and think more from a bird’s-eye view or about what’s really the benefit to our future customers. Part of my job is learning a lot from them, asking a lot of questions, and then really thinking about how can we explain this in a way that others who aren’t as technical will understand. It’s been really fun and interesting, but I love science, especially the space aspect of what we’re doing. I find it super interesting, and that’s why I mentioned I’m just learning so much.

Has there been anyone that has shaped your career journey?

One of my impactful connections would definitely be Doug Stetson, the president of FreeFall. When I started working with him on the logo, I started asking questions about what they’re doing and then learned about his background in aerospace at JPL for over 30 years. It’s nice working with someone that’s very different than yourself, but someone who really values what you’re doing. I can say that, even as a contractor and now as an employee of FreeFall, Doug does a really nice job of communicating and sharing how he values the work that you’re doing.

At FreeFall, we’re a part of this space business roundtable out of the U of A with Stephen Fleming, and I’m learning so much every month going to these meetings about the space industry and what’s happening. I’m excited that FreeFall is a part of this. We have many space companies, even right here in Tucson, and I know in Phoenix, where we’re all going to be complementary. We’re all working together to really make Arizona the space state.

How do you build impactful connections for FreeFall?

I believe in lining up with the right organizations. When you find the right ones, you’re aligning your values, your mission and your common goals, while building connections at the same time.

For FreeFall, I’ve really become involved with Arizona Technology Council. We’re all supporting technology businesses thriving here in Arizona, and through that, we’ve built some really good partnerships. As far as space companies, Vector is down here in Tucson, and they are making rockets for small CubeSats. Hopefully at some point, one of FreeFall’s CubeSats can fly in Vector’s rockets. There’s a lot of ways we can help each other and also build up Arizona together.

What’s one of the best things that you’ve done to gain visibility for FreeFall?

Last year, Arizona Technology Council did a great presentation about smart cities. The City of Tucson was there with the Department of Transportation. After the meeting we approached them and said, “Hey, we want Tucson to become a smart city. We think our antennas could be a part of that.” Over this past year, we’ve gotten to know each other, have spoken on panels together and have plans to meet with the mayor of Tucson to talk more about smart cities and building that relationship. That really came from being involved with the Tech Council, going to the meetings, and then making sure to talk to people before and after the meetings.

I think it’s not only about signing up for something, but it’s actively being there and then following up with everybody. The follow-up doesn’t always come easy, and also it can be a little disheartening if you follow up and you don’t hear from someone right away. If you had a great conversation, it usually just means someone’s busy, and try to not be scared to do a little bit of follow-up or to share some exciting news. People are generally like, “Oh, yeah, I’m sorry. I was traveling, or this or that.” We’ve all been there.

What’s one challenge that you’ve faced as a marketer, and how did you overcome it?

FreeFall is a fantastic example because we’re developing new technology, and so it’s been interesting marketing a concept that’s not fully a product yet. We have a lab, we’re testing everything, and we’re making progress, but if you said today, “Hey, I want to buy that right now,” it’s not ready yet. It’s interesting marketing something that you just can’t buy off the shelf at that moment. It involves keeping people updated on progress and keeping people engaged and explaining and using tools to show what it’s going to do. For example, the animations on our website have been a fantastic tool to have as a marketer because it’s showing how this technology will work, even though it’s not totally done at this moment.

Connect with Julie on Linkedin or FreeFall at freefallmovingdata.com.