This Entrepreneur Leapfrogged Convention to Design His Own Career 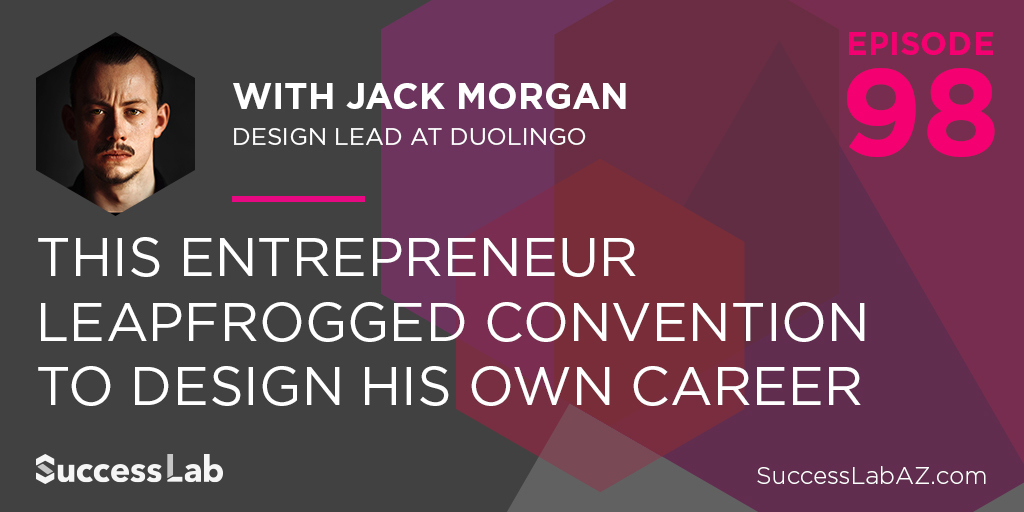 Design –– it’s much more than a pastime, a creative outlet, or an ability to pair complementary colors. Rather, it’s a way for people like Jack Morgan to shed light on an issues impacting millions of people.

Jack has been designing to help educational platforms find a voice and solve large-scale problems for nearly 10 years. Formerly the design lead for Google’s digital education division where he helped create the Google Academy London, Jack currently leads the design team at Duolingo, a language-learning website and app focused on making education free and accessible to all. His work at Duolingo has enabled him to help more than 300 million people learn a new language. It also inspired Jack to produce a short documentary about the impact of language on the lives of four Syrian refugees.

In this episode of The Success Lab Podcast, Jack talks about how his upbringing in East London influenced his career path, how his purpose as a designer and entrepreneur has evolved over the years, and how the Japanese idiom “ichi-go ichi-e” impacts his life –– personally and professionally.

I was born to a working-class family in East London. No one in my family had ever been to college and we didn’t have very much, but my parents always made sure I had pencils, paper, and things like that, so I grew up drawing everything I could see. That came very naturally. My father also taught me how to build computers, and we built one together out of old spare parts. It did eventually blow up, but not before I got a good bit of use out of it. I used that thing to teach myself everything I know about design, software engineering and math.

I started skipping school around the age of 13. I sat at my computer from dusk till dawn, tinkering with software and design and reading blogs. A few years later, I went back to school and passed the test I needed to graduate high school when I was 16 years old. Everyone told me, “Go to university. Go to art school. Go to design school.” The problem was the tuition at the time was about 10,000 pounds a year. It didn’t make any sense to me, so I looked for another way, and found an advertising agency in central London that was looking for young blood and I offered to work for free. Eventually, they did hire me –– and pay me –– which is nice. I was about 17 years old and the youngest employee in the company’s history. I worked there for about five years and by then, I’d already started my own company, and I was working with clients all over the place. One of them was Google.

While working with Google in London, I was designing brands and education programs, which eventually led to the creation of Google Academy London, a program dedicated to teaching people digital skills. It was then that I got the call from Luis von Ahn, the co-founder and CEO of Duolingo. He flew me out to Pittsburgh for a week to sell me on the job and the rest is history.

Did you always know you wanted to have your own business?

I always knew I wanted to create things, and I wanted to try and contribute something to the world. But I didn’t really know what that was. As a kid, I didn’t really know what a designer was or that you could own your own design company. I always thought I would draw cartoons or comic books and it wasn’t until I built that first computer that I figured out there was a profession called graphic design.

My mission now is to try and design solutions to the world’s biggest problems –– education, poverty, mental health. Unfortunately for all of us, there are a lot of big problems out there. But fortunately for me, that means I have a lot to contribute.

How do you get your major ideas off the ground?

When I’m trying to decide where I want to put my creative energy and what I want to spend my time on, I ask, “Where can I add the most value?” If you come at it with that mindset, I think you’ll get far more back than you ever would have asked for anyway. All the while, you will be making the world a better place, so my thing is I try to not criticize. I try by creating first, and that’s where a lot of these big ideas come from. Then, it’s only if I think the idea is really going to add value that I bring it to someone and say, “Hey, look. Can we do this together? I can’t do it alone. I need you. We can do it together.”

How do you master your time?

Over the years, I’ve tried all the life hacks. Some of them have helped, but nothing has really worked for me. What I try and do is identify when I’m most likely to be interrupted, and then I don’t schedule things I know I need to do during those periods. I used to get up and try to do creative work in the morning. But that’s when my phone pings the most. So I don’t schedule anything that I need to do for the first half of the day. Then, by early evening, it starts to get quiet. Most of my creative work happens between about 5:00 PM and 2:00 AM. I always tell myself I’m going to figure out a way to make this more of a sustainable schedule with a partner, and a family, and things like that, but I haven’t figured that out yet.

Is there one impactful connection you’ve made that has shaped your journey?

I’ve been fortunate to have many incredible mentors over the years, but the one who stands out the most in terms of sheer impact is Mark Mendoza. He’s the CEO who hired me when I was 17 years old. He gave me a shot when I had nothing. The biggest thing he taught me really is that winners lose more often than losers, and that’s a lesson I never forgot.

What’s one piece of advice you’d give someone looking to make impactful connections?

There’s this old Japanese idiom that I try to live life by. It’s something I’ve felt long before I knew what it meant. It’s called “ichi-go ichi-e,” which means “one time, one meeting.” It’s all about treasuring meetings with people. It’s bittersweet because we’ve all had wonderful experiences and conversations with a friend. We look back on most of these memories and wish we could have them again, but really we know that it’s never going to happen quite the same way again. That message always rings when I’m with my partner, my friends, my family, when I’m traveling and meeting new people. It makes me pay attention.

Coffee drinker, yes or no? Yes, too much.

One business tool you’re geeking out over right now? A tool called Figma. It’s like Google Docs, but for design tools.

What’s one book you’d pass along to a fellow entrepreneur or designer? The War of Art by Steven Pressfield.

One person you’d like to make a connection with? Bill Murray. I’d like to have a lot of long conversations with Bill.

If you could live anywhere in the world, where would it be? Tokyo.

How many hours of sleep do you get each night, on average? Nowadays, it’s about nine.

How can people connect with you or Duolingo? First of all, you can download Duolingo –– it’s completely free –– or go to duolingo.com. And I’m mostly available on email at jack@duolingo.com or you can visit my website, jackmorgan.com.